CCFC’s mission is to alleviate poverty and protect forests in the most at risk villages in our work region. The building of agro-ecosystems embodies both aspects of our mission.

As the name implies, an agro-forest parcel combines crops (agro-) and trees (forest). We encourage our students to start with a very small and manageable parcel. CCFC has designated minimum requirements for these parcels. A parcel must be a minimum of 625 square meters and contain a minimum of 16 trees.  Each Kids & Birds student is invited to create their own parcel. And a parcel is a requirement for all WALC students. March, April and May of 2020, we have been receiving many photos and positive comments from your students. Many are grateful to have a parcel providing them with nutritious food during the Covid 19 lockdown.

Edin Che Tiul came to CCFC only once, through the Kids & Birds program. Three years later he sent via WhatsApp the following four photos of his parcel and the pea harvest. 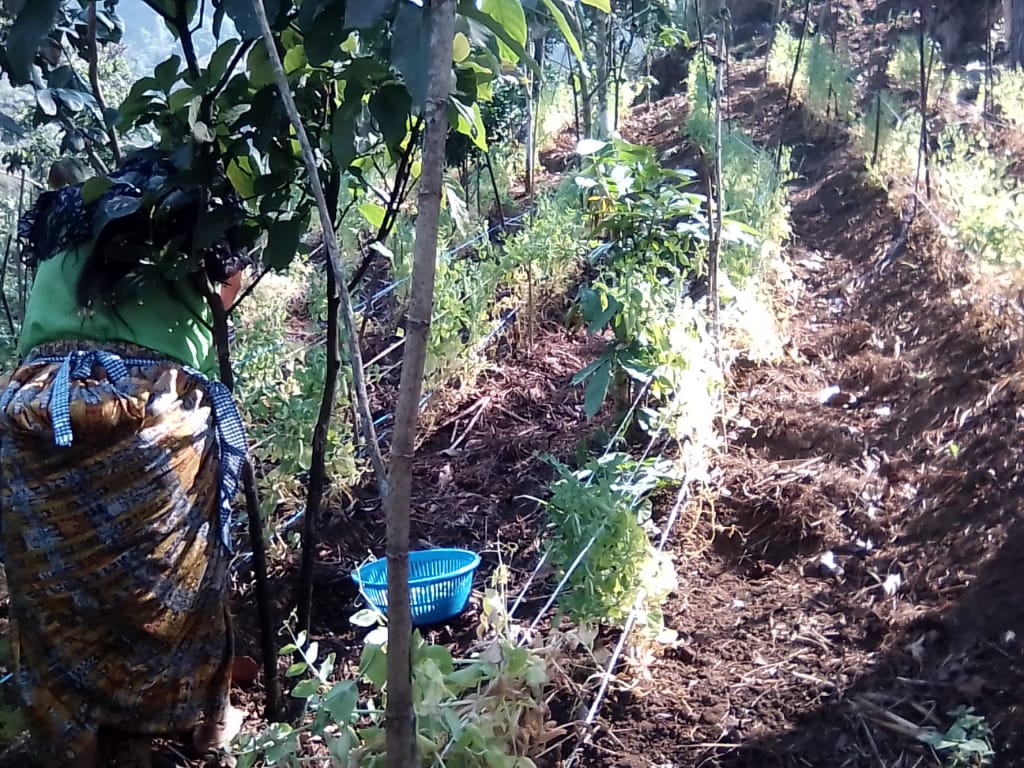 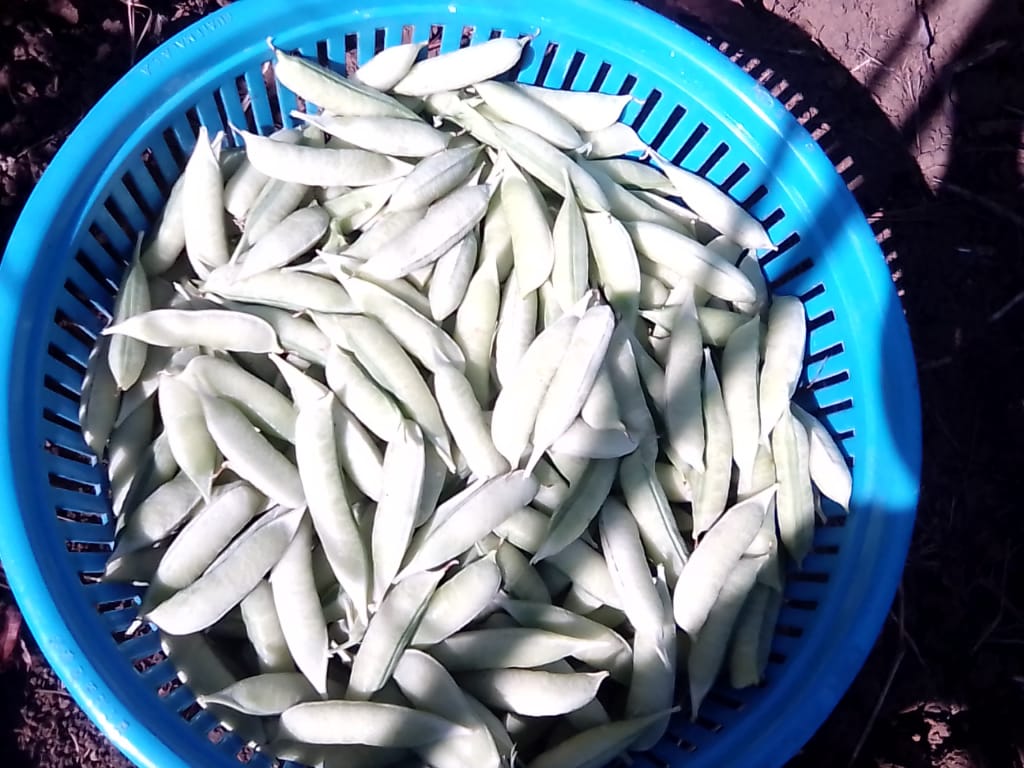 He commented that he has been harvesting naranjilla (lulo) and bananas and harvesting and multiplying taro. Edin’s parcel is a great example of how one can achieve a quick return by interspersing crops that can be harvested in 60 days with other longer term and perennial crops. 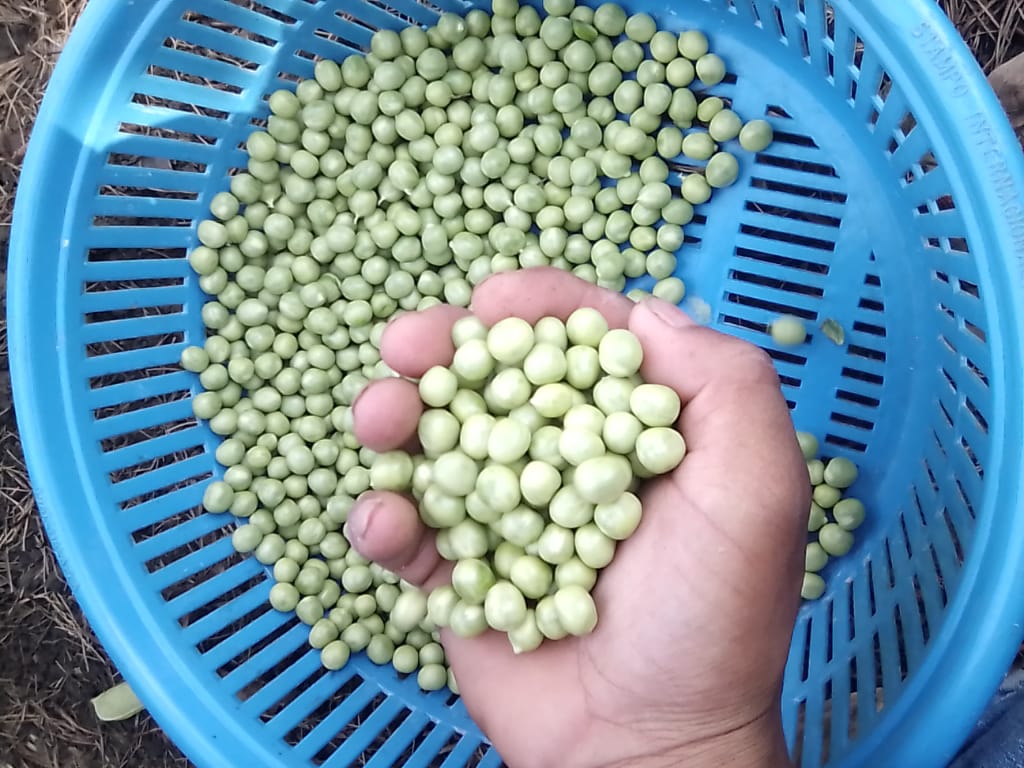 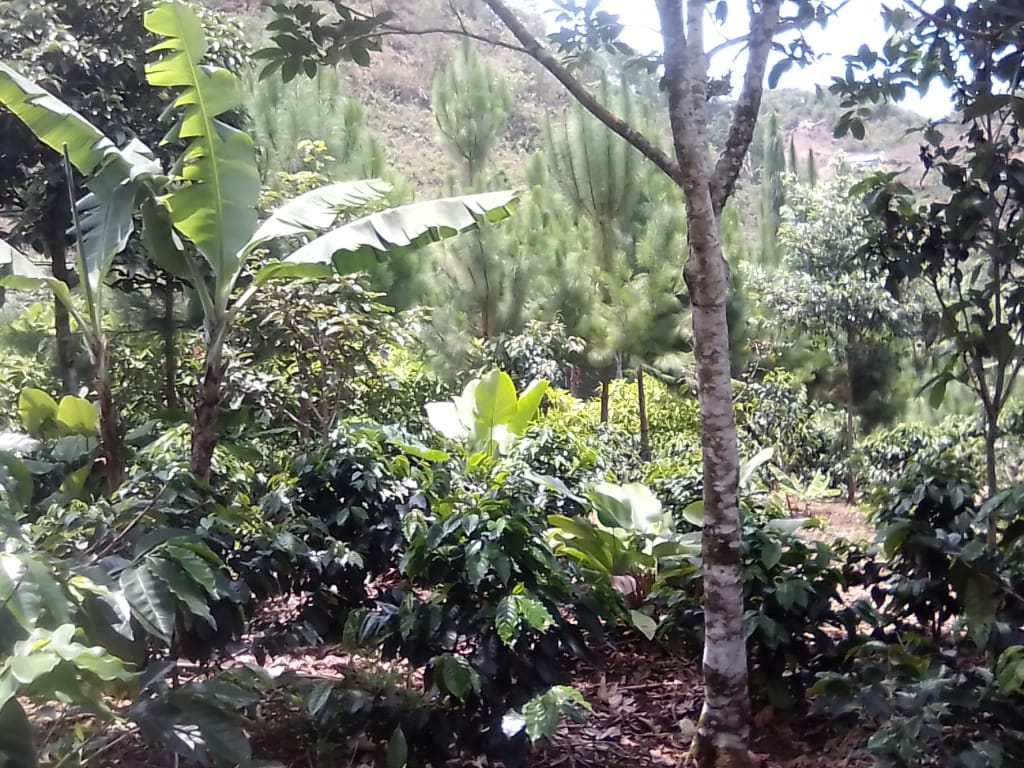 CCFC invites students to consider five perspectives when planning their agro-forest parcel. First, will this parcel be economically viable? Will it be worthwhile economically? In other words will I earn from the parcel more than I invest in it, both time and money, short term, mid term, and long term? CCFC students are invited to make a balance sheet to project costs, gross incomes and net profits from their parcel.

Second, will the parcel benefit me and my family nutritionally? This question invites students to consider the nutritional value of each of the products that will be harvested and consumed by the family, as well as crops that will be sold. WALC students study the causes and health effects of chronic malnutrition pervasive in their villages. Their agro-forest parcel plans include crops that provide the vitamins and minerals missing in most diets. CCFC specifically invites students to consider the nutritional needs of an expecting or nursing mother when designing the parcel.

Fourth, will the parcel produce food that will be readily accepted in my family and / or village? Will there be general acceptation of the food that is brought home from the parcel? CCFC reminds students that food is not nutritious unless it is eaten.

Fifth, will the parcel be doable? Are the resources needed to make the parcel locally available, such as seed sources and plant starts? If a parcel plan is too complex or difficult it might not come to fruition. CCFC encourages students to start small and continually enhance their crop diversity over time. 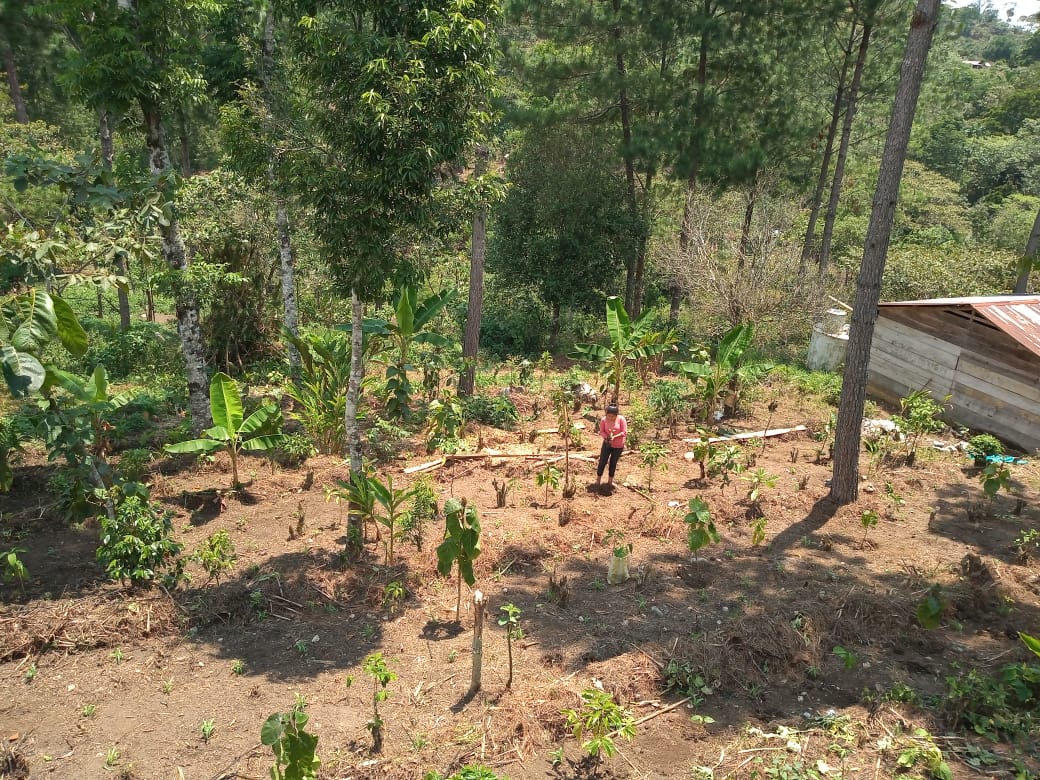 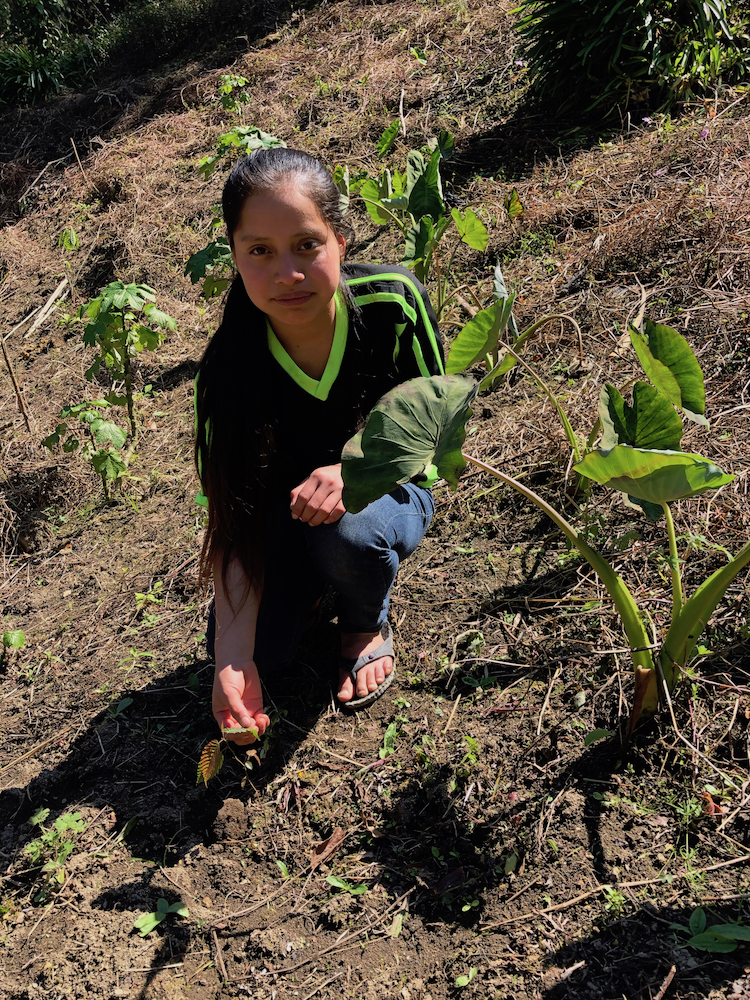 Food security for a warming planet

Traditional slash and burn agriculture is becoming less and less sustainable, both economically and environmentally. There are good reasons to look for new ways to grow crops, especially for subsistence level growers. When a grower uses fire to open a new field, carbon is lost from the soil and released into the atmosphere as carbon dioxide. Agricultural burning leaves the soil poorer and more susceptible to erosion.  Conventional agriculture, including slash and burn, is the cause of 80% of deforestation in the tropics.

Agroecology, specifically growing crops in agro-forest parcels, is one way to mitigate the adverse effects of climate change. An agro-forest shields crops from cataclysmic rain events and strong winds. Trees and shrubs in the agro-forest filter rainfall and increase its percolation and retention in the soil.  Agro-forest safe guards crops from minor droughts and dry spells. Shade from tall trees keep carbon and other nutrients from burning out of the soil. An agro-forest parcel creates its own micro-climate, cooler than in open fields exposed all day to the sun. A diversity of perennial greens, fruits and vegetables in an agroforest complement the annual crops cultivated in alleys between the trees. Subsistence farm families benefit from a more balanced diet and year round food security. 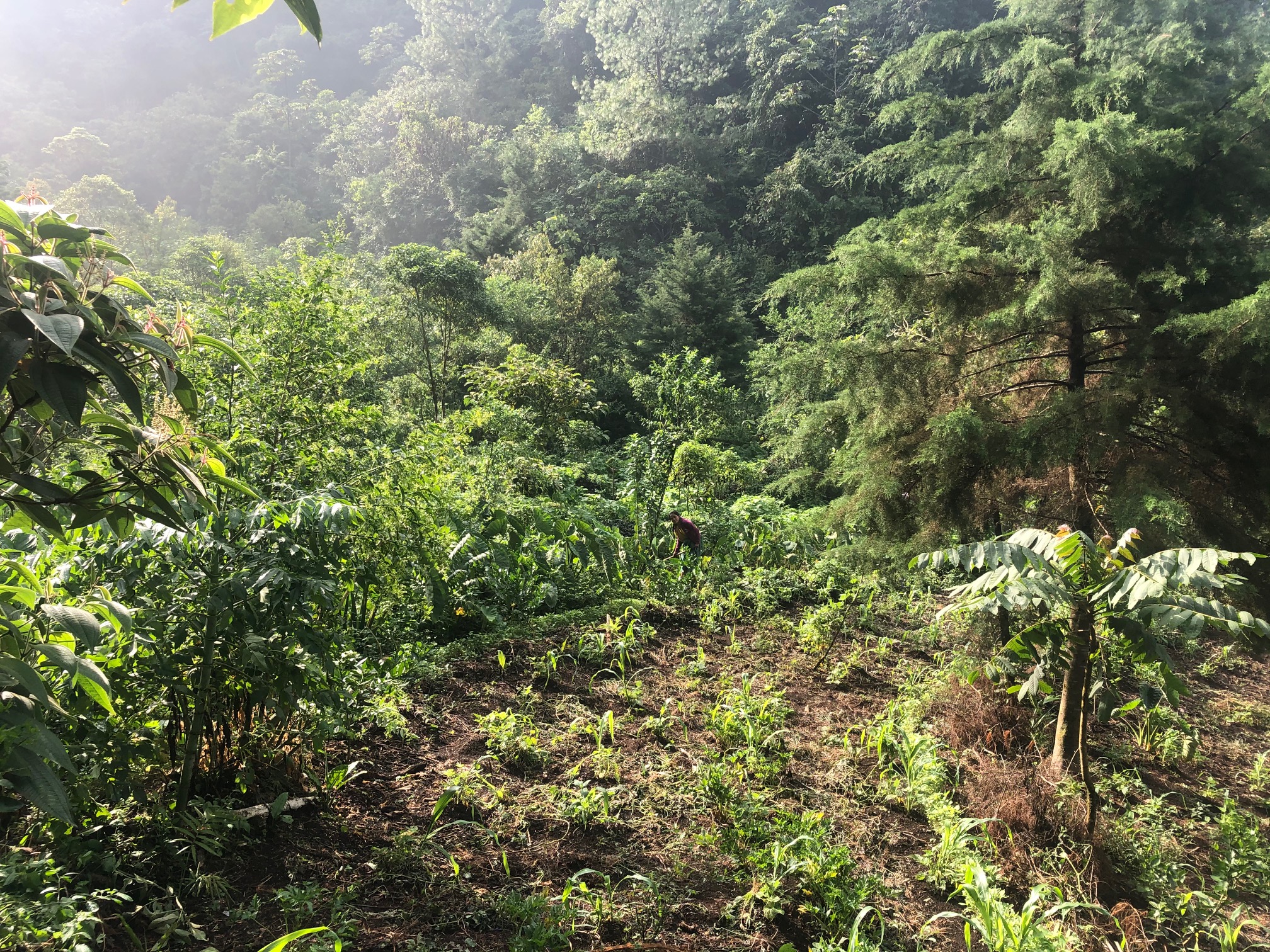 Trees are the first and most important part of an agro-forest parcel.  Here are five ways that trees benefit agriculture.

2) Trees build soil with their leaves. Trees drop leaves and needles which decay and build humus. This organic matter not only builds topsoil but also feeds the microorganisms that make the soil healthy. Decaying leaves also help soil to absorb and retain more moisture. A soil rich in humus will not dry out as fast as a soil with little or no humus.

3) Trees reach deep and enrich soil. Tree roots release carbon based sugars into the soil so that microorganisms can consume them. One class of these microorganisms, called Rhizobateria, specialize in freeing phosphates from the soil and protecting the roots of the host plant from harmful bacteria. Another class of microorganism, called mycorrhizal fungus, enhance the workings of plant roots by penetrating into micropores, increasing the absorption of minerals and nutrients from the soil. The microorganisms’ waste in turn feeds the tree. The tree creates a win-win situation, when trees give carbon based sugars to the soil, they in turn get nutrients and minerals through the microorganisms.

4) Trees prevent soil loss. With more intense rain events, growers, especially those that farm in the mountains, need to look for ways to keep their soil from washing away. When trees are planted along the contours of a mountainside they create a barrier to soil erosion and a safeguard against landslides. Not only do trees hold the soil in place, their roots give water a path down into the soil.

6) Trees give shade. Some traditional crops grow best in full shade or partial shade. Shade keeps soil from drying out. Too much direct sun in hot climates can cause microorganisms to become dormant or even dry up and die. Direct sun can degrade the surface soil carbon, turning it back into carbon dioxide. The warmer our climate gets the more shade becomes a beneficial factor for some crops. Dappled sunlight or partial sun can be ideal for some crops, while other crops need full sun. Making a diagram of the parcel can help the grower place each crop in its ideal amount of shade or sun.

Q’eqchi’ Maya have always been a planter – gatherer society. The Maya have huge cultural affinities to corn growing. In the Maya world, corn has always been king, at times, even a god. But a lesser known, yet equally important aspect of Maya traditional subsistence is gathering. Traditionally, Maya women have been the gatherers, while Maya men have been the corn planters. As wild areas disappear across the Maya world, fewer and fewer areas remain to gather wild food sources. This loss has left gaps in the traditional Maya diet. Corn has always been king, but a king with a diverse and plentiful court. Today those courtiers are dropping out one by one. The cornucopia of diversity in diet and nutrition has been replaced with more corn, Top Ramen instant noodles and tiny envelopes of MSG flavorings. Cheap junk food, more than a lack of food, has become the main cause of chronic malnutrition across the Maya world. The loss of traditional wild food gathering means the loss of ethno-botanical knowledge and lore, not to mention nutrition.

To a certain extent, agro-forests mimic wild areas. Food sources that historically were gathered under the forest canopy are now  planted and gathered in the shade of an agro-forest garden. Some of these traditional plants need shade to grow.

An agro-forest parcel allows for multiple strata production.  Food can be grown and harvested from 1) the under-story, 2) shrub level, 3) fruit tree and mid level, 4) forest tree and canopy level and 5) emergent tree level. These five strata allows a producer to have five zones of production on the same area of land. Think of the difference between a five story apartment building and one story house. The two structures might have the same foot print in terms of square meters of area, but the five story building will have a lot more floor space. A field of corn, produces one crop per growing season, while an agro-forest parcel is constantly producing many crops across multiple strata.

Aida Tiul Putul from Chamil, San Juan Chamelco sent this photo of her parcel. Her forest trees are still short but the trees in the background give the idea of what the parcel will look like in 5 year. (side note: notice the papayas. Those would have been impossible to grow 10 years ago in her village. And would have gotten a good laugh 15 years ago had one suggested growing them. But the climate has changed and now papayas are growing in Chamil.) 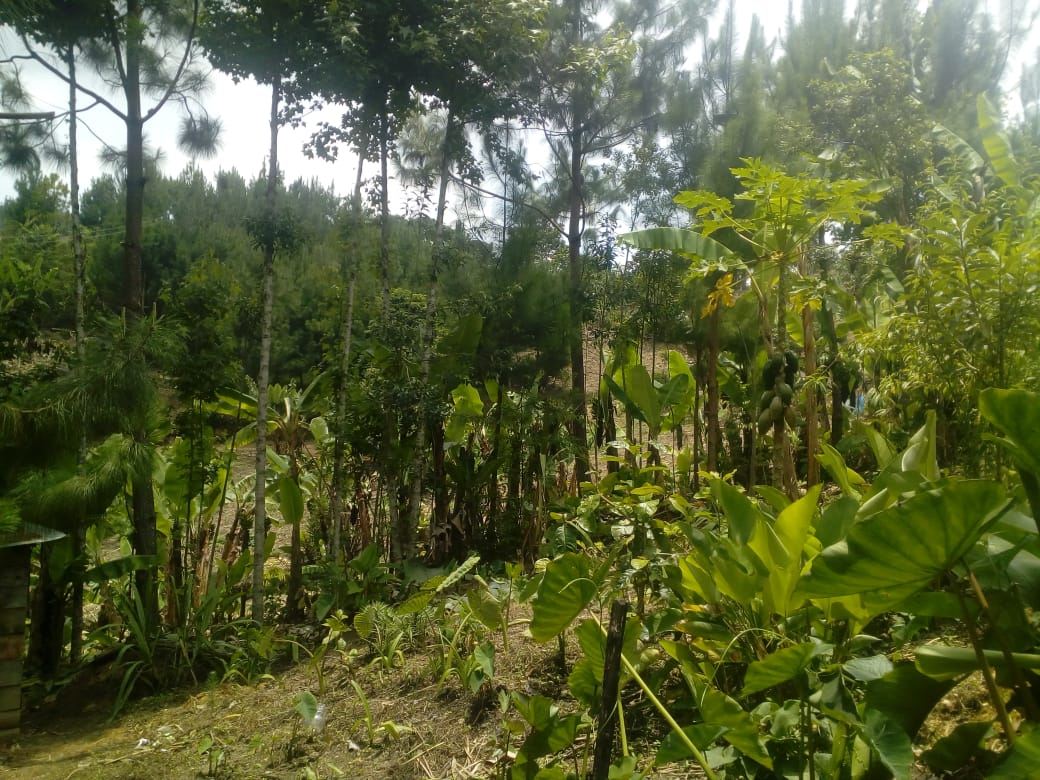 Because an agro-forest parcel mimics a forest, native plant species traditionally gathered for food can be planted and propagated in the parcel.  Shade can be managed through pruning and thinning branches. An over all 25% percent shade cover allows some crops to be in full sun most of the day and some crops to enjoy full shade all day. 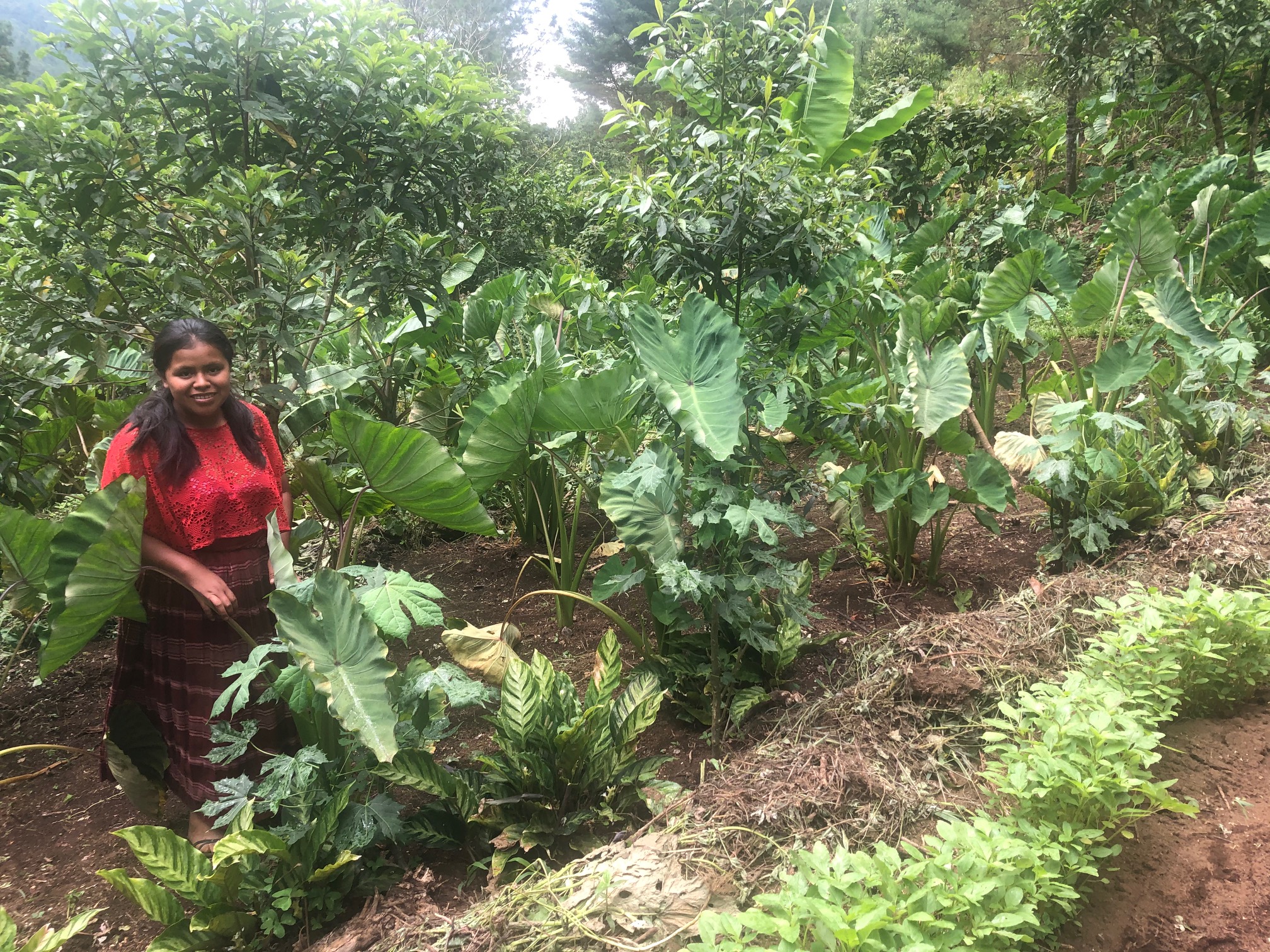 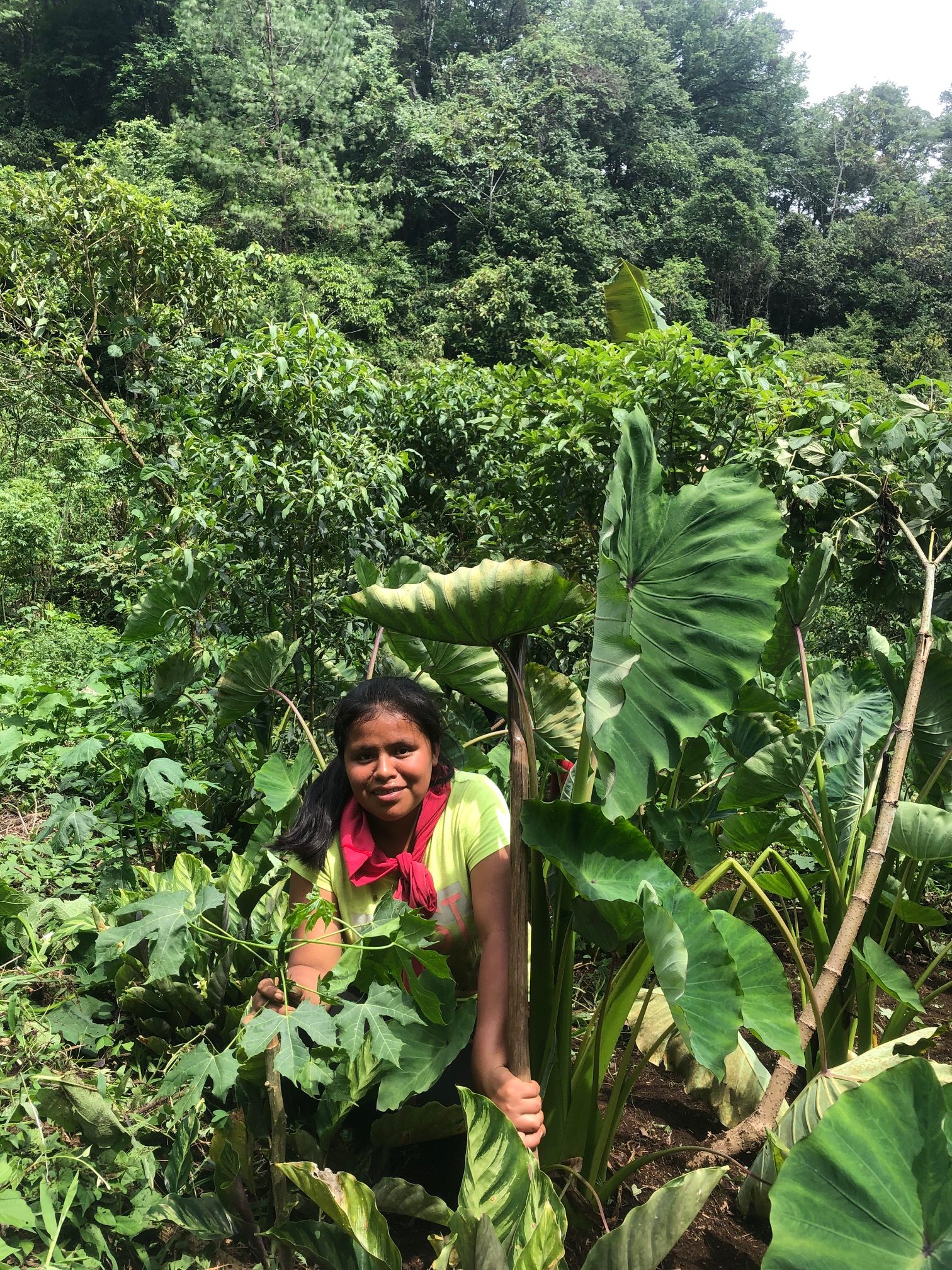 Maintaining vertical complexity in the parcel benefits birds and other wildlife. Creating habitat for insect eating birds is like having a pest control team working for you. A forest parcel mimics a real forest, restoring the many of the complex balances of a functioning ecosystem. The word agro-ecosystem captures this concept. 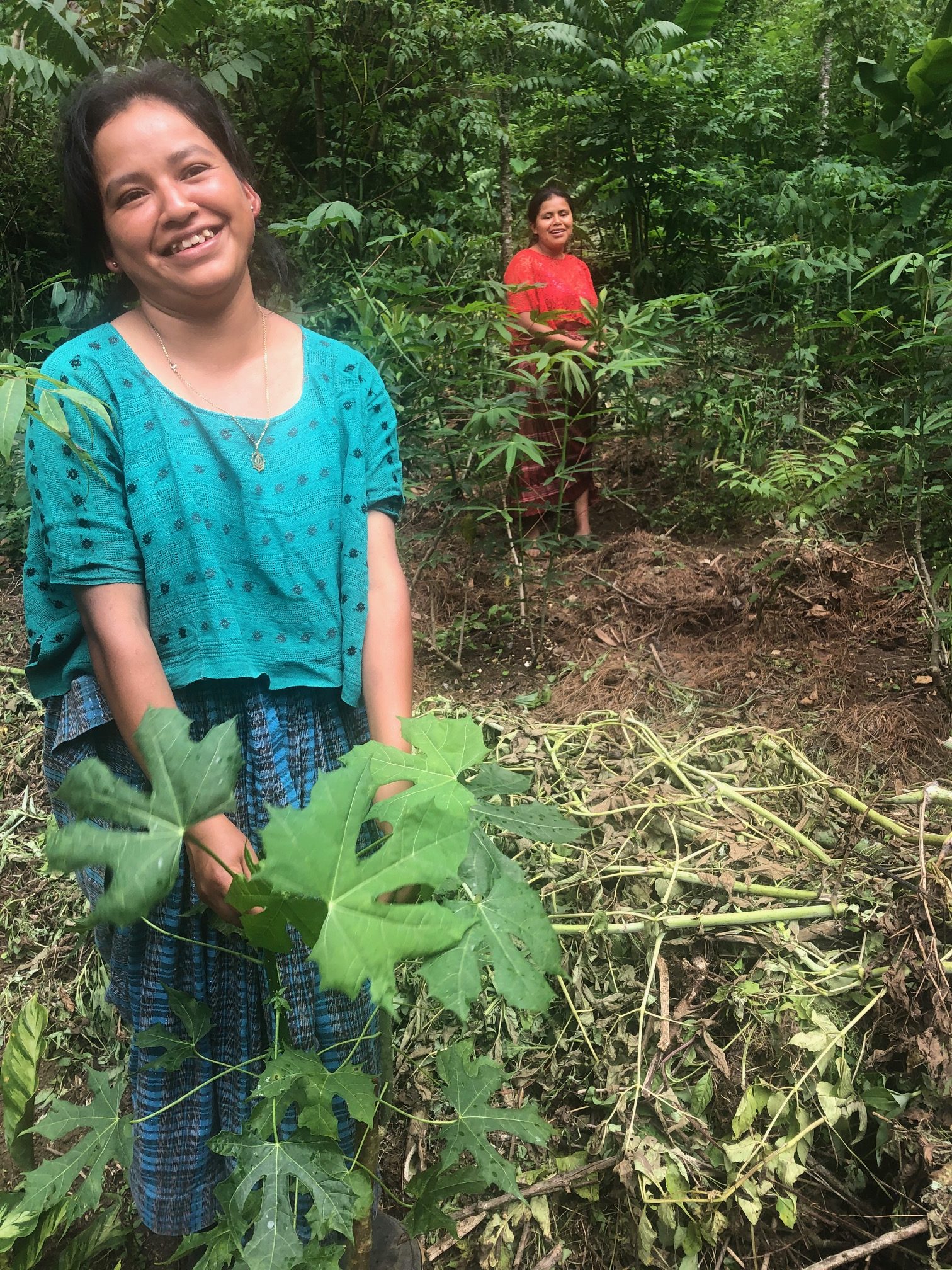 Photo below: chili peppers are a great crop for an agro-forest parcel. This variety of chili thrives in partial shade or dappled sun. They bring an excellent price at the market. One serving of this chili is like taking a vitamin C with 108% of the daily recommended allowance. Silvia Mes Caal in one of CCFC’s agro-forest parcels. 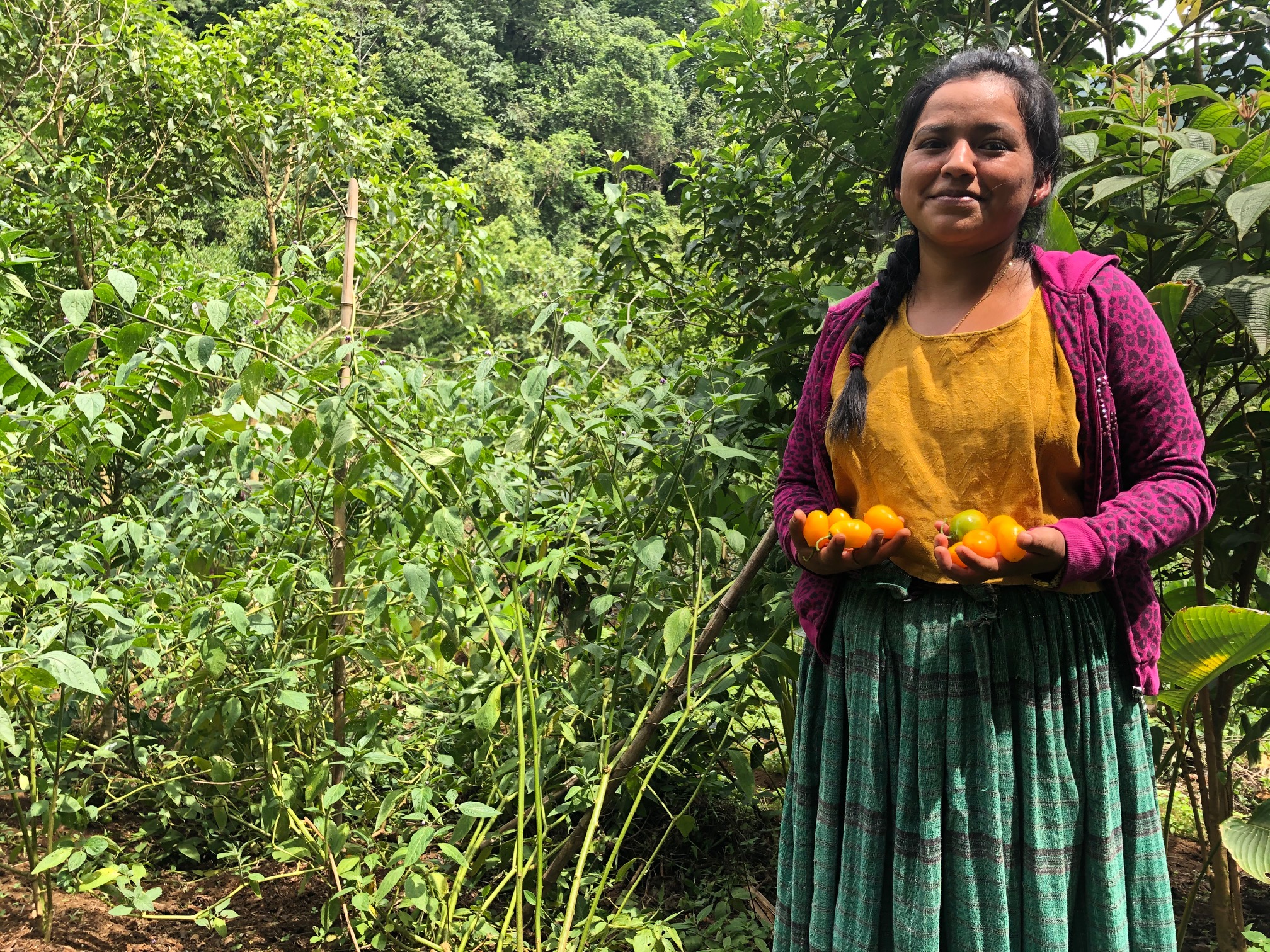 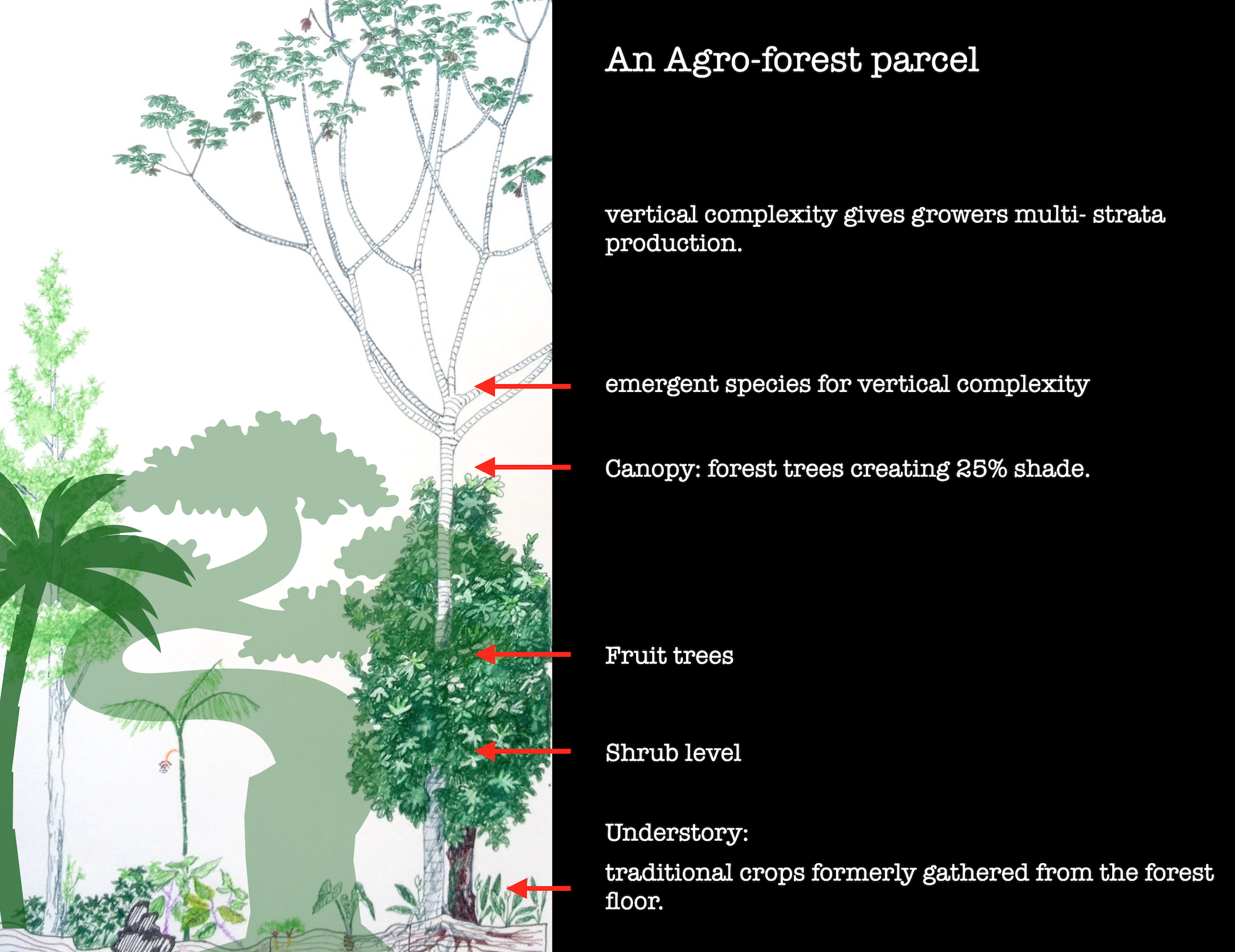 An agro-forest parcel can and should be hospitable to pollinators. Central Guatemala is home to many species of stingless bees, called meliponines.

Photo below: a recently opened Pacaya Palm flower attracts many kinds of pollinators. 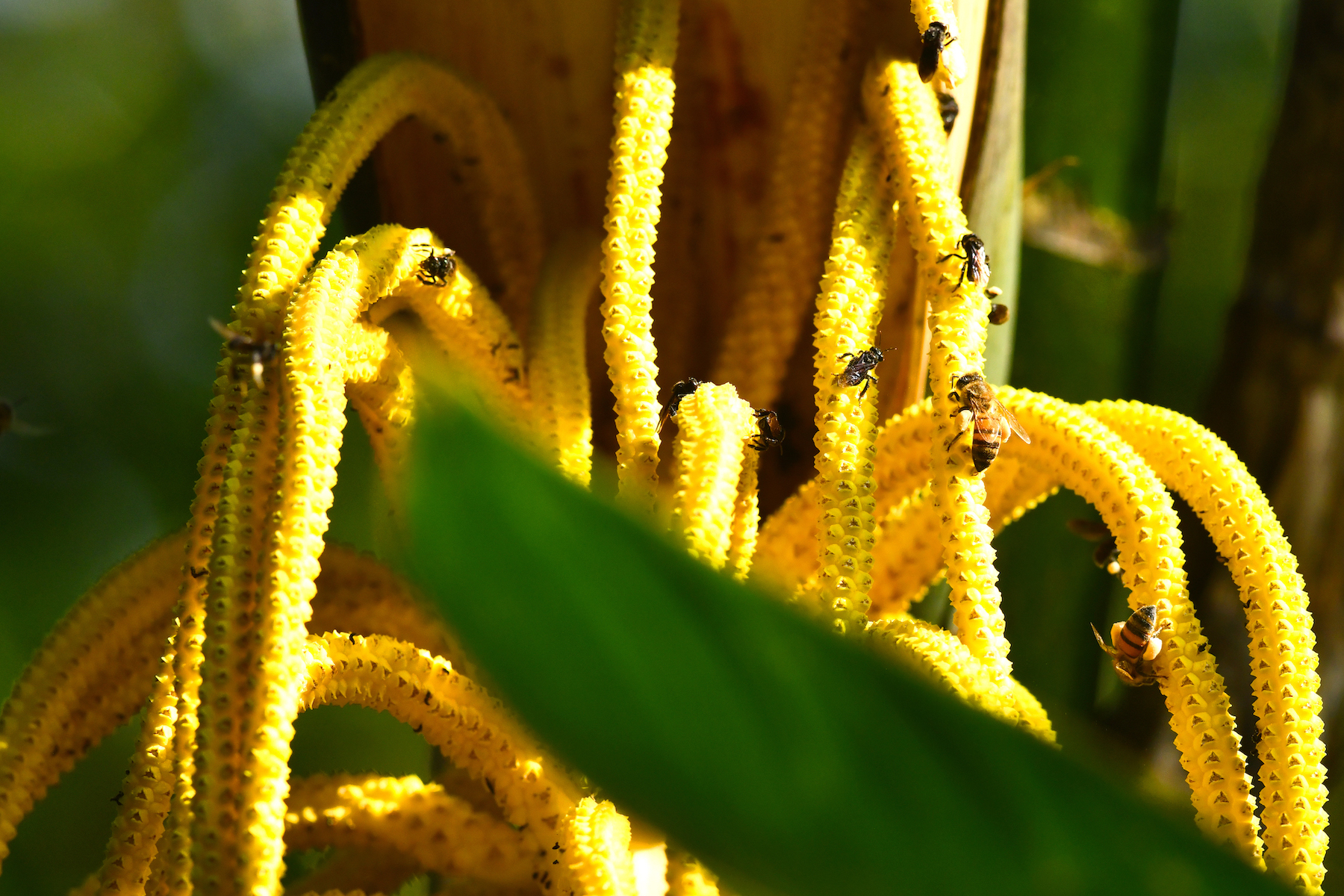 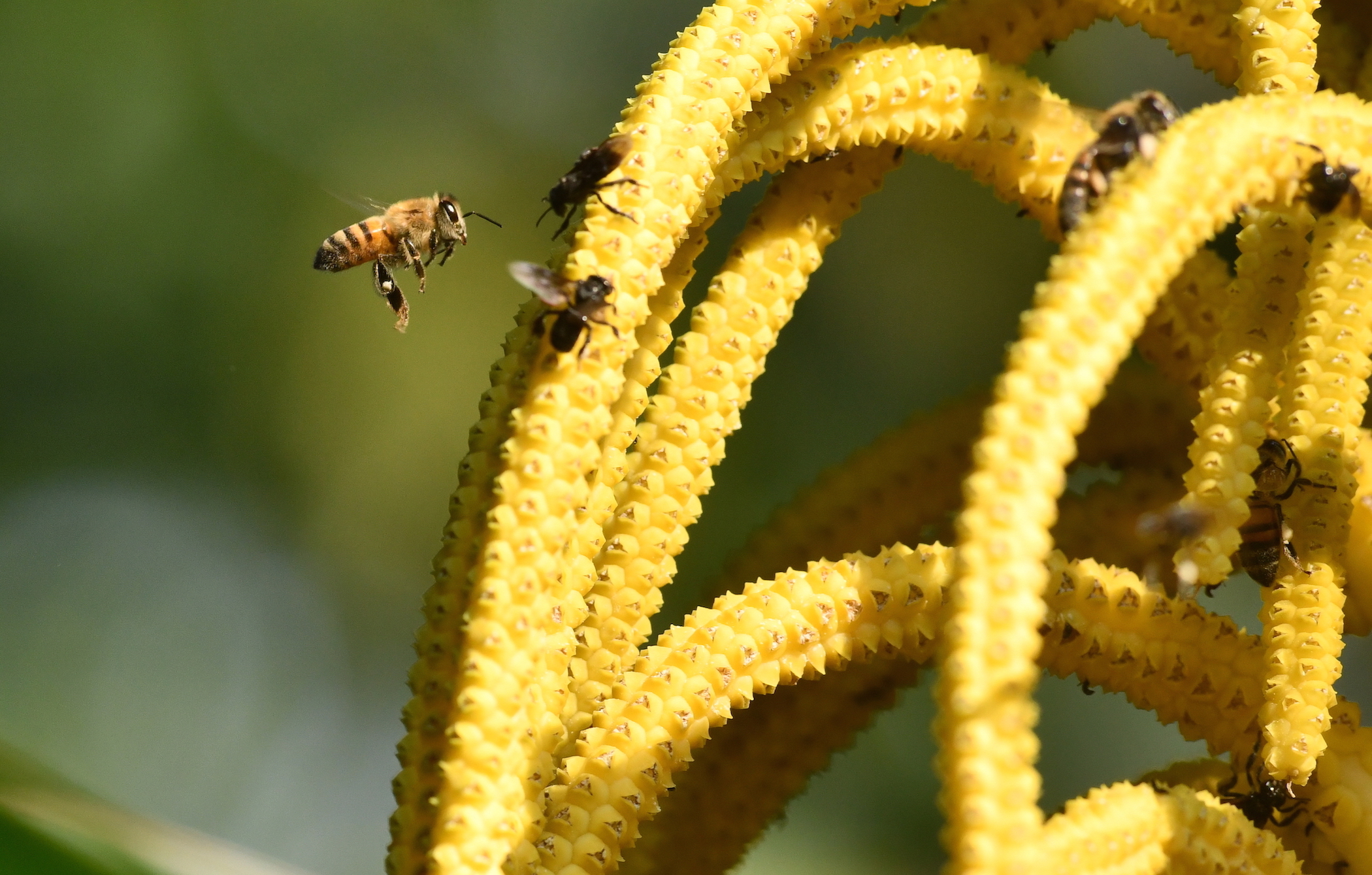 For size comparison. Both the honey bee and the meliponine are carrying pollen on their corbiculae. A bee can carry about half its weight in pollen. 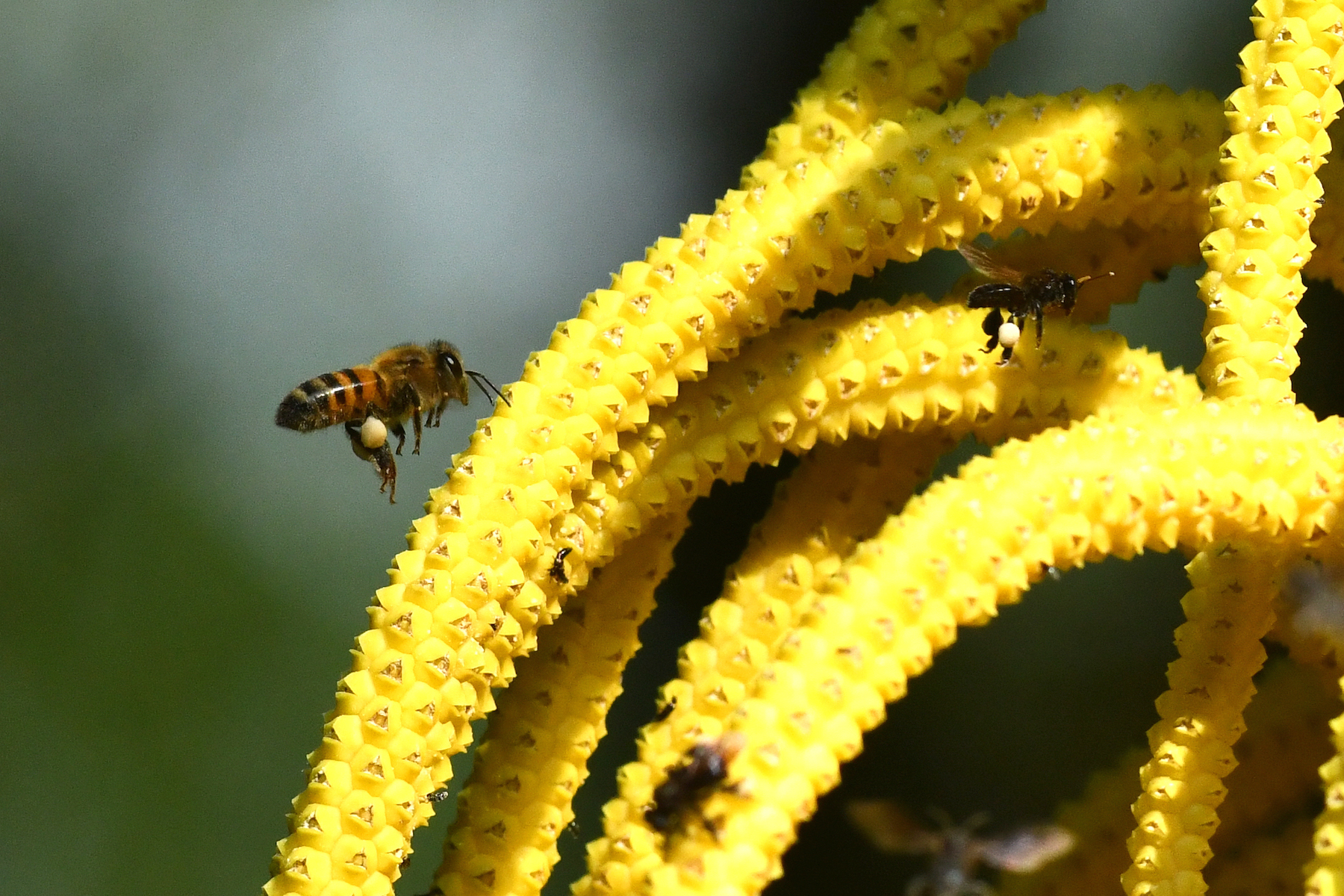 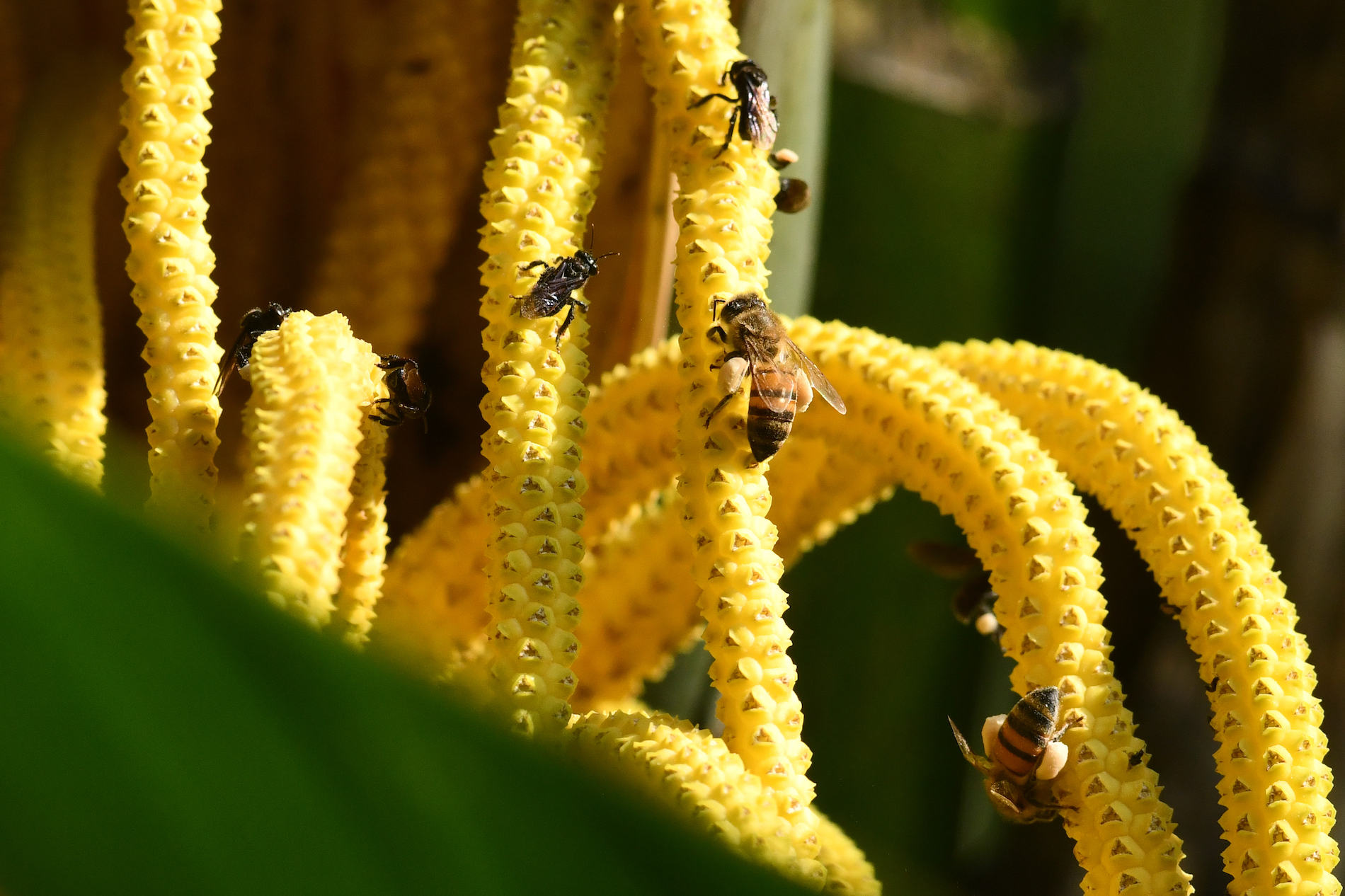