CCFC focuses its conservation efforts in the cloud forest region of Guatemala’s central highlands. These cloud forests and cloud forest fragments are for the most part unprotected and vulnerable.

CCFC’s has identified 110 remote, rural villages along the Yalijux-Cacquipec-Xucaneb corridor and with the Sierra Sacranix. These 110 villages are CCFC’s work focus. These villages were identified as having a very high conservation priority and potential. They are also villages of extreme poverty and social challenges. Most of these 110 communities are extremely remote and have no access by road.

The Guatemalan National Biodiversity Strategy (NBS: 1999) identifies Alta Verapaz as one of nine priority areas for the conservation of Guatemala’s biodiversity. The NBS document recommends a community-based approach to conservation in the central highlands. The document suggests that conservation should reply on local culture and reality. It advocates for the management of selected forests of global, national and regional significance be carried out with the participation of local people and institutions in accordance with local culture and social realities.

The primary forests and the villages of CCFC’s primary work focus area are located within Alta Verapaz (15*30’N; 90*30’W), nearly straight south of Madison, Wisconsin and nearly straight west of Barbados in the Caribbean.

CCFC’s focus area is of high conservation priority for another reason as well. The areas are 100% within two of Guatemala’s IBAs or Important Bird Areas. IBAs as defined by Bird Life International are areas of high conservation priority due to their importance to birds. There are three general criteria for IBA status: that the area is home to significant numbers of a globally threatened species, and / or is home to endemic species or species with a restricted range or habitat, and / or has exceptionally high numbers of migratory birds. CCFC’s work focus area is entirely within two of Guatemala’s IBAs: GT007 and GT010. Both of these IBAs fit all three of these general criteria. More specific criteria involve specific species and habitats.

Importance to migratory bird species and species of special concern:

It would be hard to overstate the general importance of northern meso-america to neotropical migratory birds. From late September to late April these forest are simply dripping with neotropical migrants. That’s seven full month of the year that these birds are in Guatemala. Which brings up the question, are neotropical migrants really Guatemalan birds that just go north to work? 😉 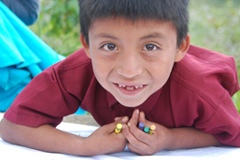