On Monday, May 11, 2020, CCFC purchased 400 pounds of plums from Marta and Rosalia Si Xol. On Monday, May 18, CCFC purchased 270 pounds more. This was not the first time they sold their fruit to CCFC and it won’t be the last. The fruit comes from their agro-forest parcel on their family’s smallholder farm in the mountain village of Sebob, Alta Verapaz, Guatemala. Marta and Rosalia’s agro-forest parcel has grown along with them. Jump forward on this page to read their backstory or continue here for the story of their plums.

An agro-forest parcel has huge economic, environmental and nutritional benefits. Marta, Rosalia established their agro-forest parcel with the support of CCFC. Their parcel even got a visit from a team of researchers from the Cornell Lab of Ornithology whose research focused on quantifying how these parcels benefit birds and people. 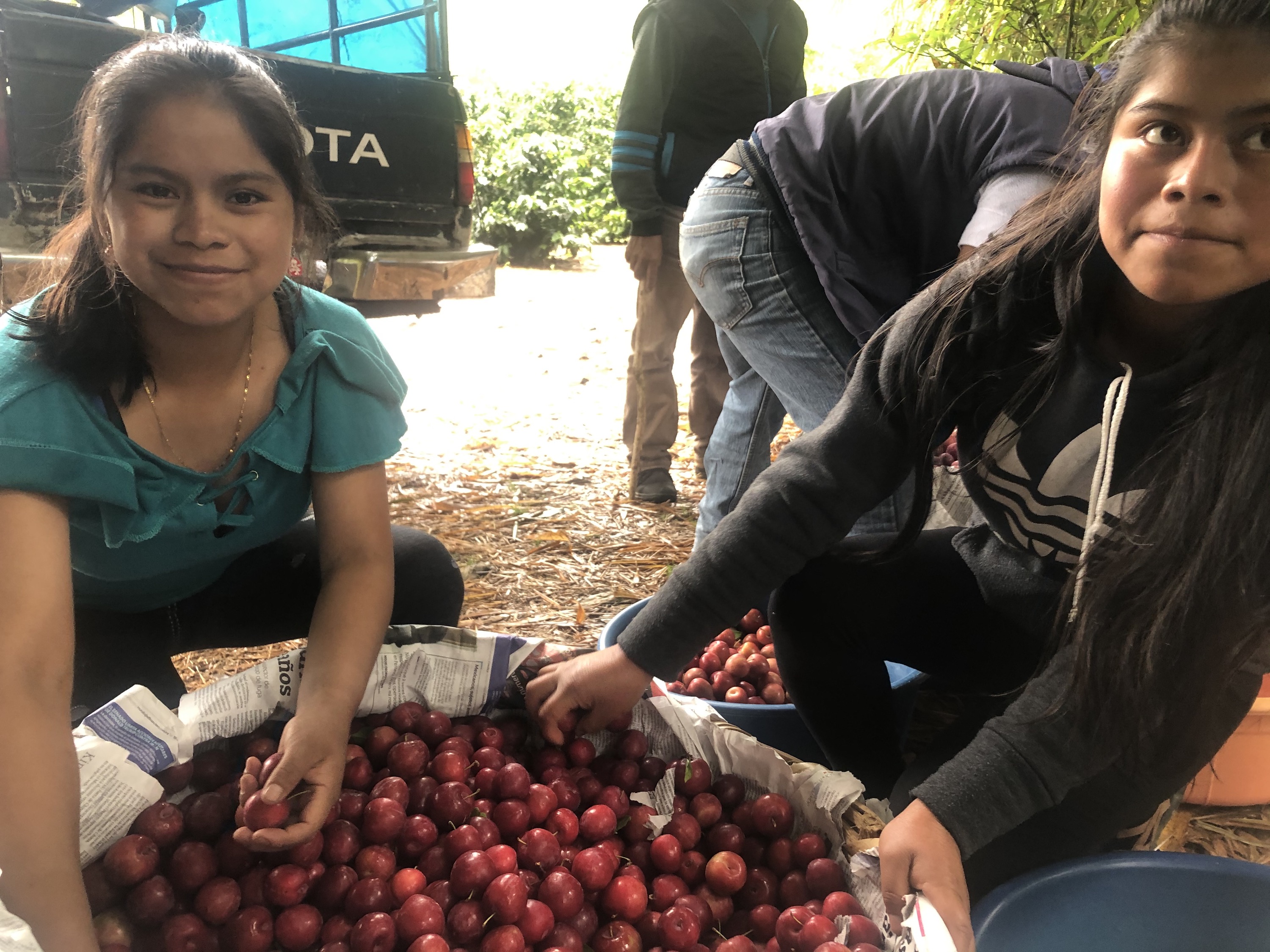 Of the 670 pounds of plums purchased from the Si Xol family, CCFC processed 250 pounds in two days.  Adding value to 250 pounds of plums looks like this: 250 pounds sold in the local market at peak season would have bought $33 (US). Sold to CCFC at a fair trade price, Marta and Rosalia made more than twice the price they would have made in the market. Since the village of Sebob is too high to grow coffee and cardamon, deciduous fruits like plums offer a real lifeline to the subsistence level grower. 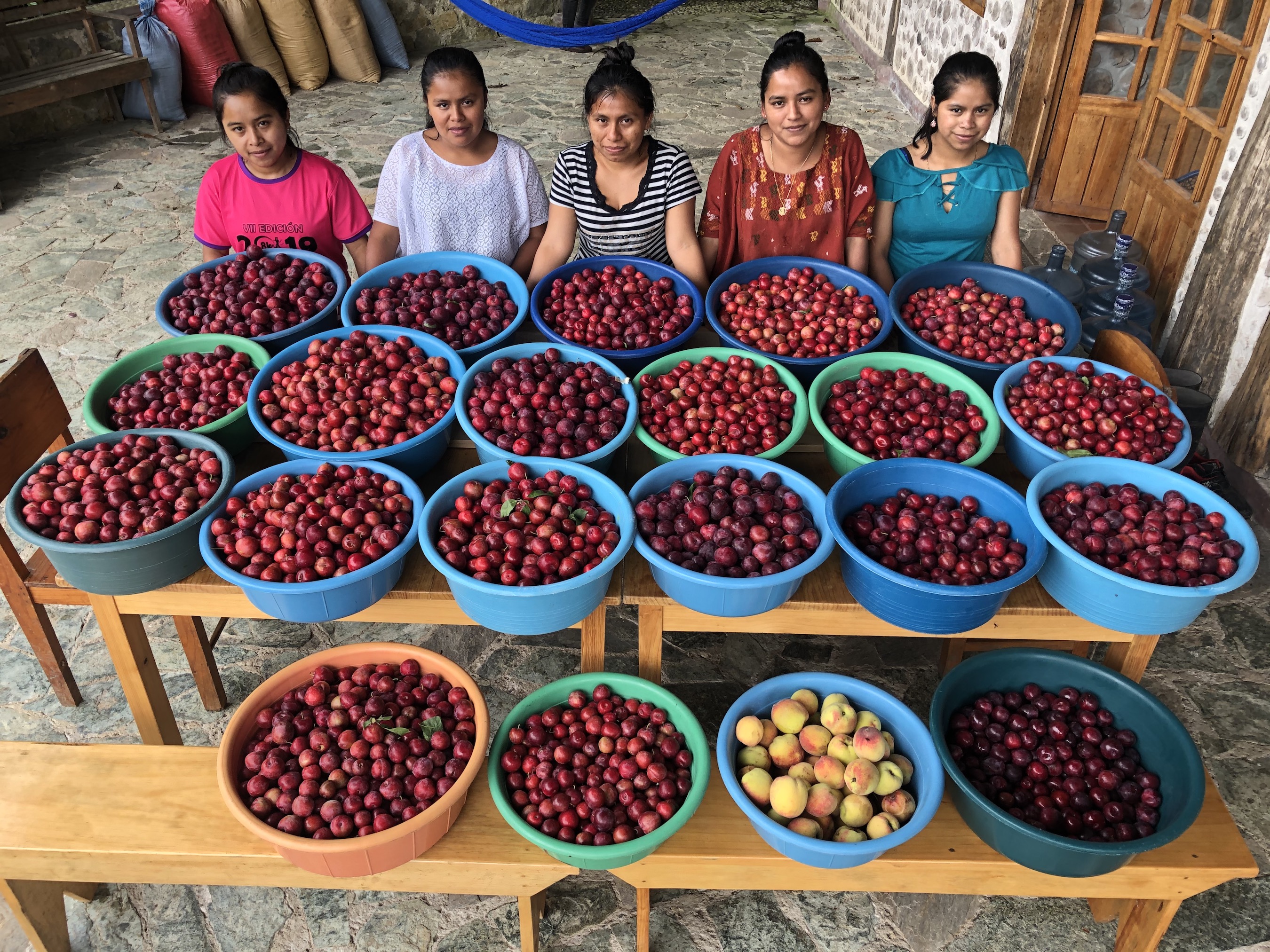 Photo below: Marta (far right) is proud of her work in adding value to her harvest. The 250 pounds rendered 360 nine ounce jars of plum jam and sauce and 40 quart jars of canned plums, as well as several plum pies and cakes.  Value adding took what would have been a retail value of $33 and turned it into a gross retail value of $1,800. After accounting for ingredients and costs, selling the 360 jars will earn $900 net profit, more than enough to send 3 young women through the WALC program. Plus the team enjoyed snacking on fresh plums, cakes and pies. 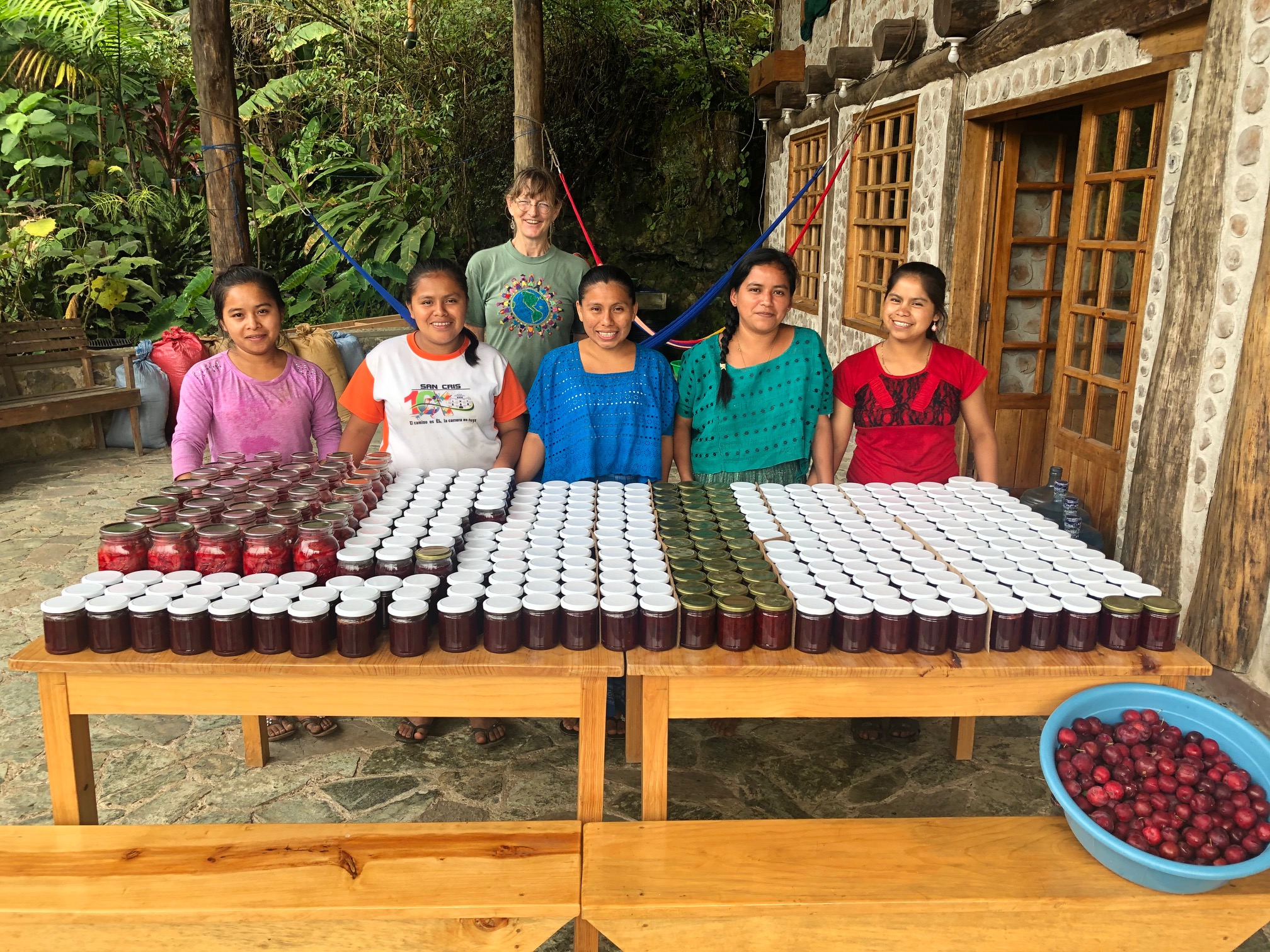 Marta with her plums. CCFC donated 100 of the first 400 pounds of plums to a local care home. 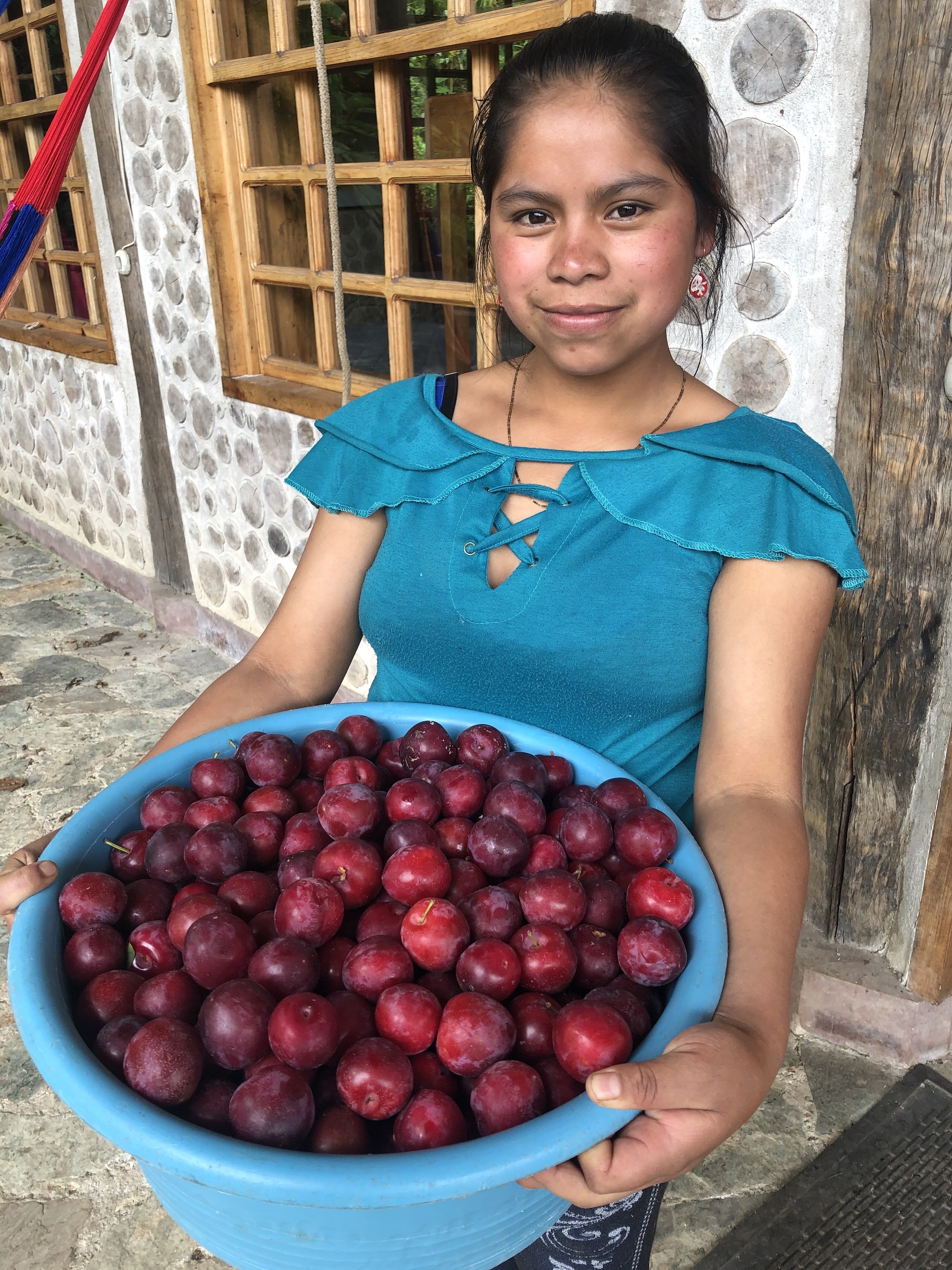 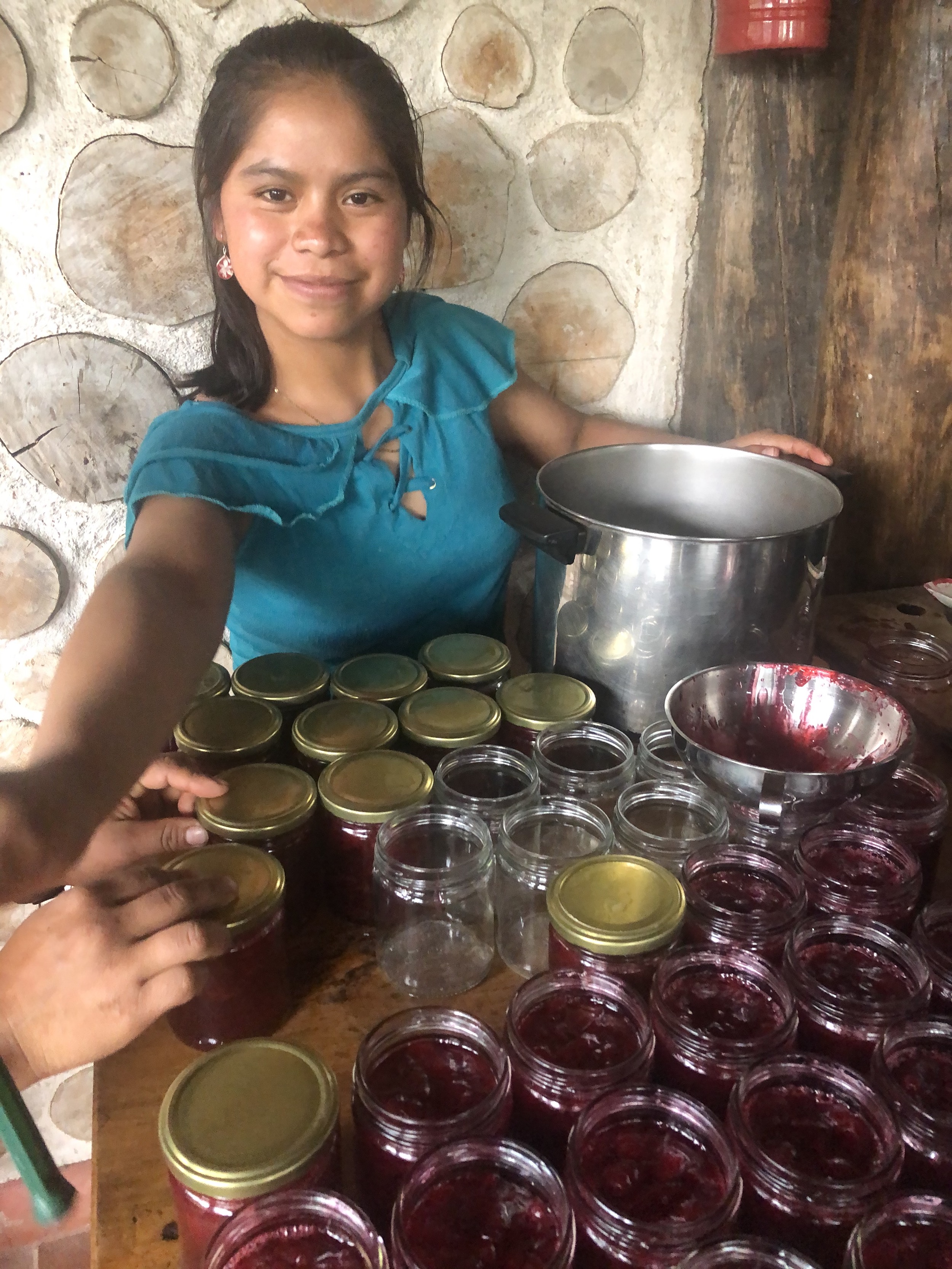 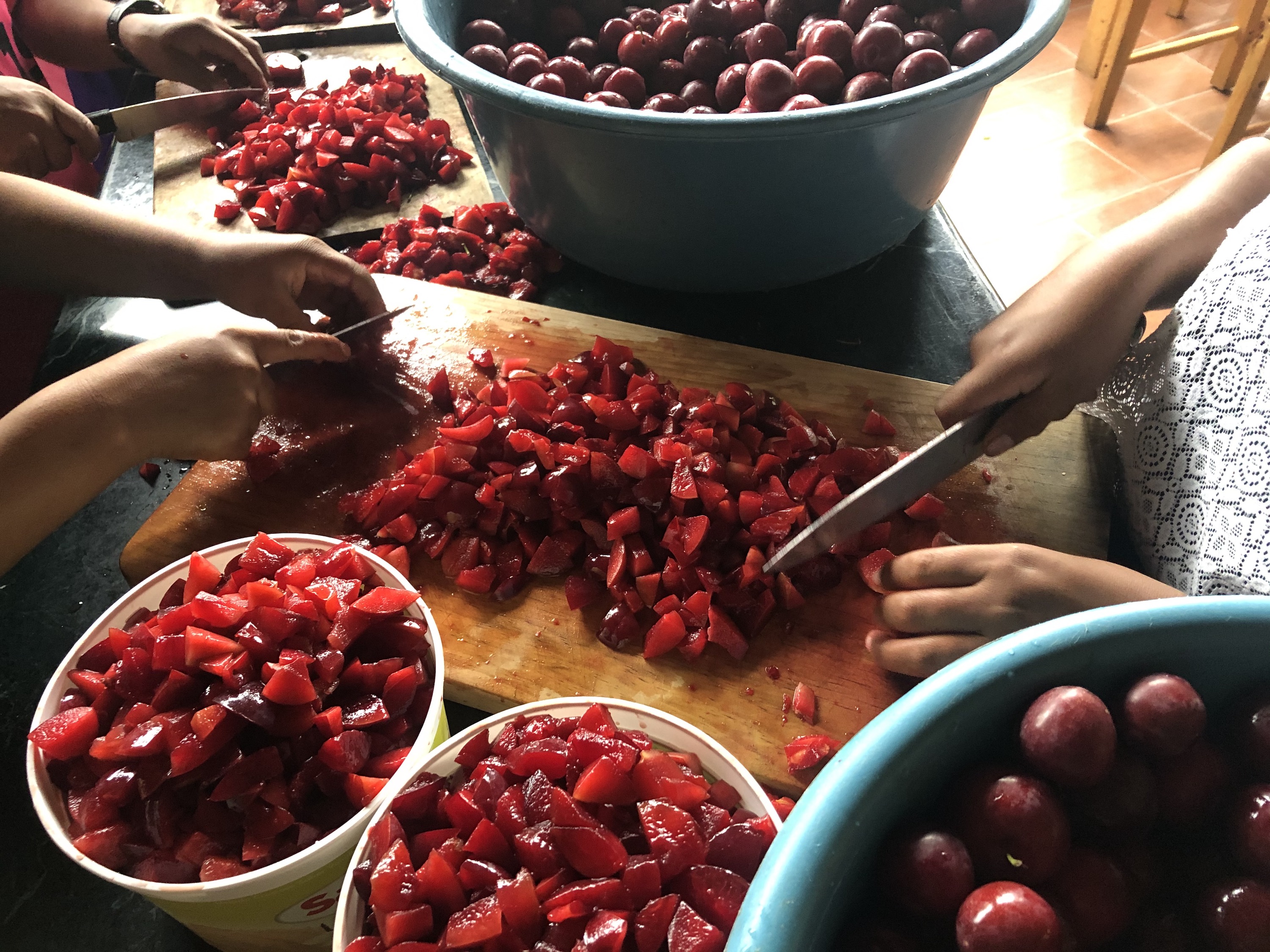 Marta and Rosalia are two amazing young women with an exceptional knack with fruit trees. Marta and Rosalia grew up together with their plum trees. Snacking on delicious plums while they and their siblings were growing up provided a vitamin C, A and K and a health source of energy.

On October 17, 2019, Marta and Rosalia sold 67 pounds of apples from their agro-forest parcel to CCFC for the WALC program. WALC students in the fall of 2019 learned to make apple butter, which in turn was sold by CCFC to fund WALC scholarships. 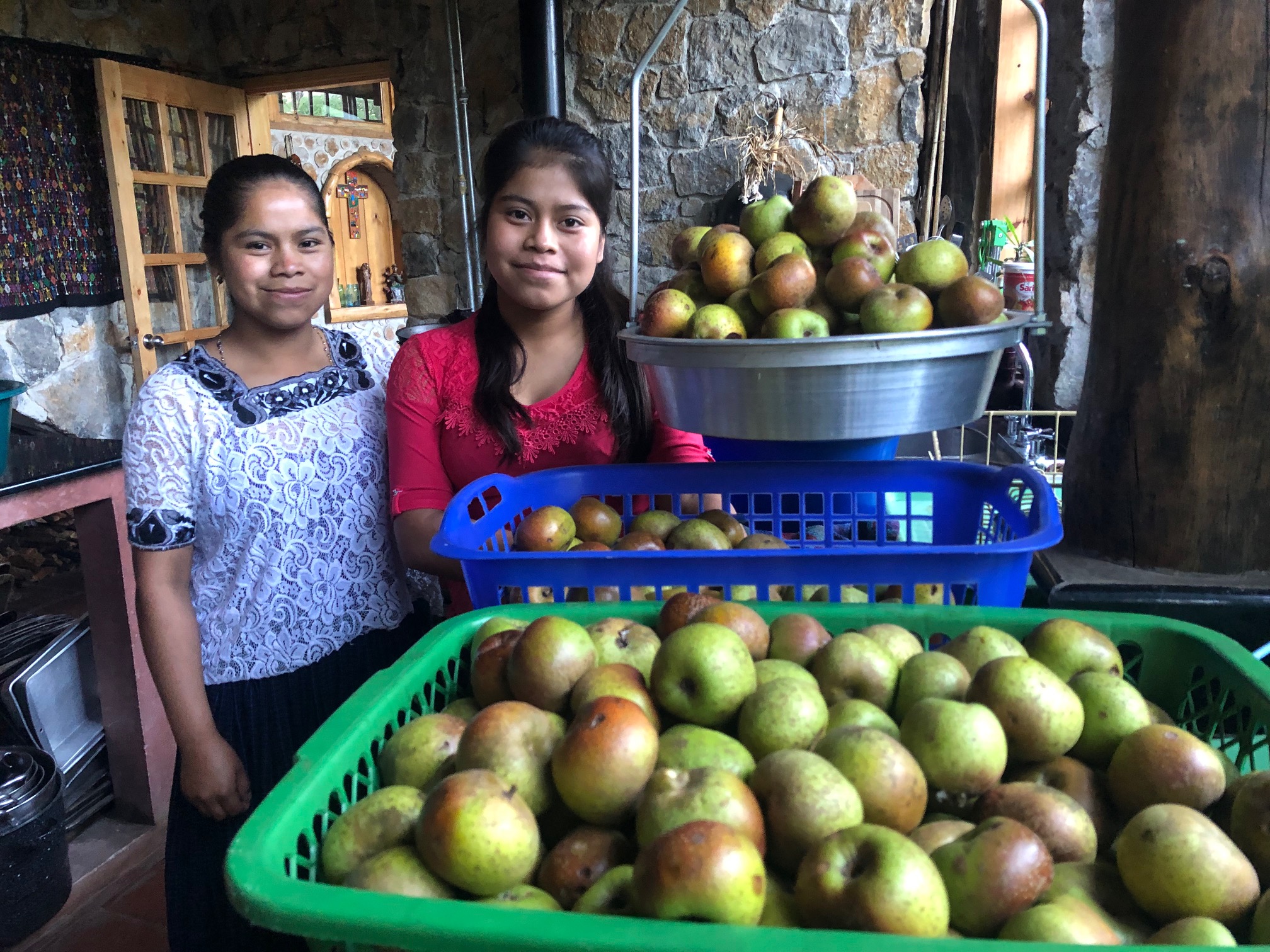 Marta and Rosalia first knew of CCFC in 2011 as their village school was one of the first schools to participate in CCFC’s Kids & Birds program, initially funded by the US Fish and Wildlife Service for the conservation and protection of neotropical migratory birds.  They continue to participate Kids & Birds has now become one of two flagship programs of CCFC involving students in conservation, continued education and well being.

On March 8, 2012,  Marta and Rosalia took part in their school reforestation project organized by CCFC. Students planted trees from CCFC around their school and above their community water source. Later, CCFC supplied fruit trees for students to plant at home to established small agro-forest parcels. In 2012, Marta (inset photo left) was in third grade and Rosalia (inset photo right) was in second grade. 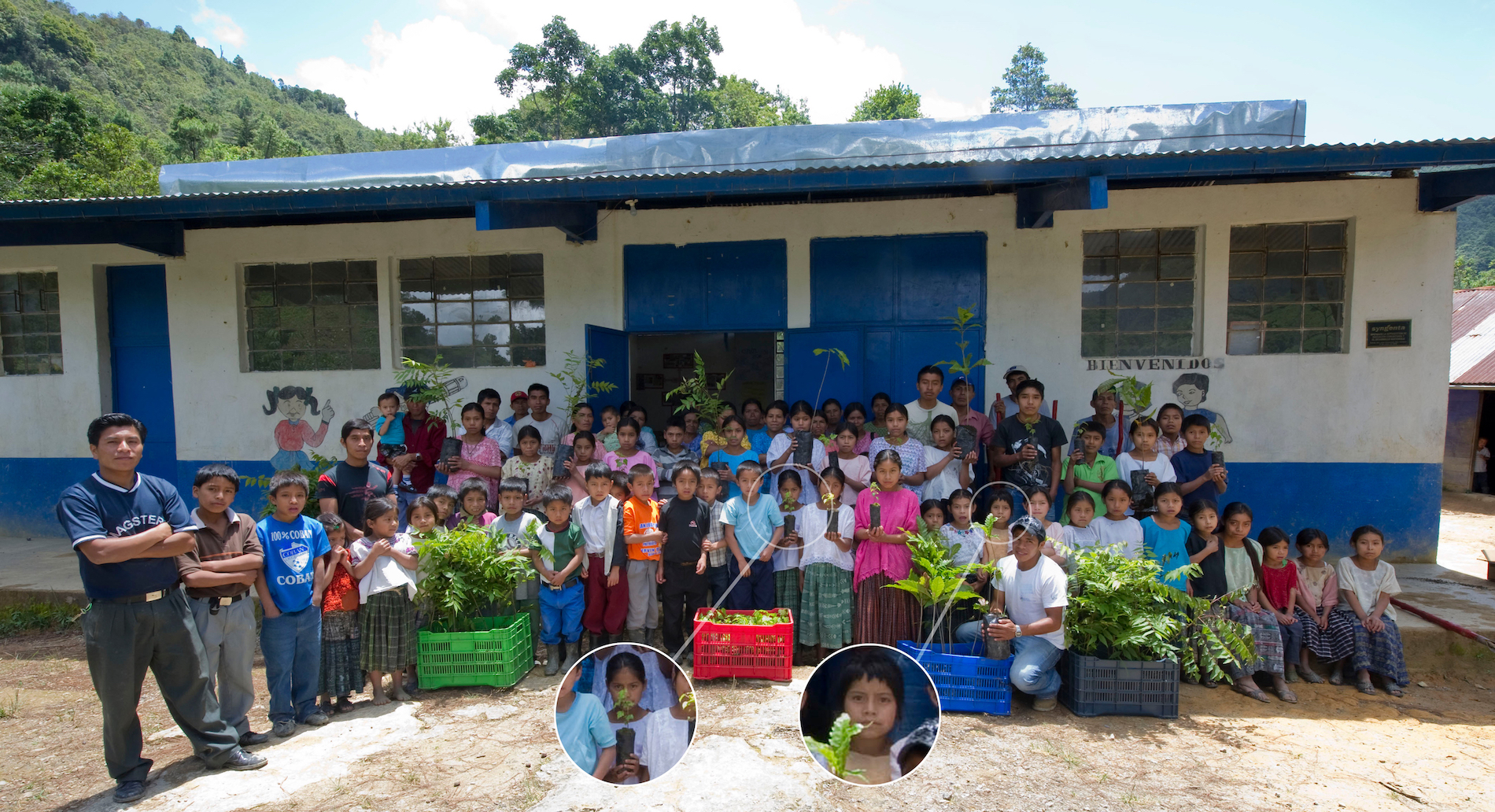 Photo below: In 2013, Rosalia (far left), as a third grader, learns about the birds of her village. Her CCFC Kids & Birds teacher, Vilma Ac of Chicoj Raxquix (center left) at the time, was a first year WALC alumna. Marta, Rosalia and all the students from their primary school planted fruit trees, restored degraded habitat and learned the basic principles of agro-ecosystems. 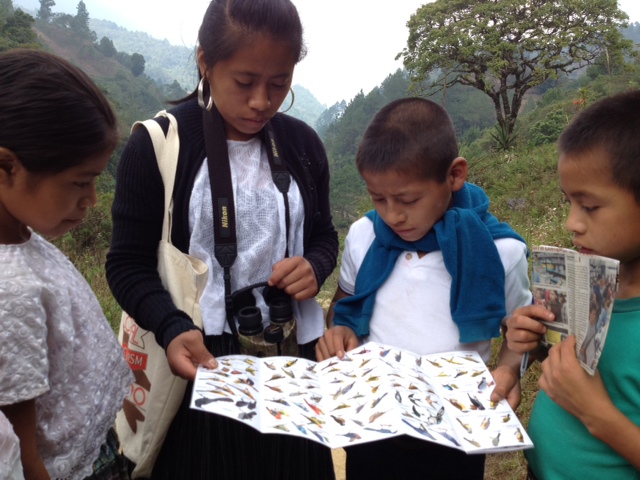 Photo below: In 2013, students performed a skit about migratory birds. In this photo, migrating Wood Thrush, Hermit Warbler and Golden-cheeked Warblers fly north and meet two Bald Eagles. The Bald Eagle, front and center with gray wings and a black and white plaid skirt, is Marta in fourth grade. 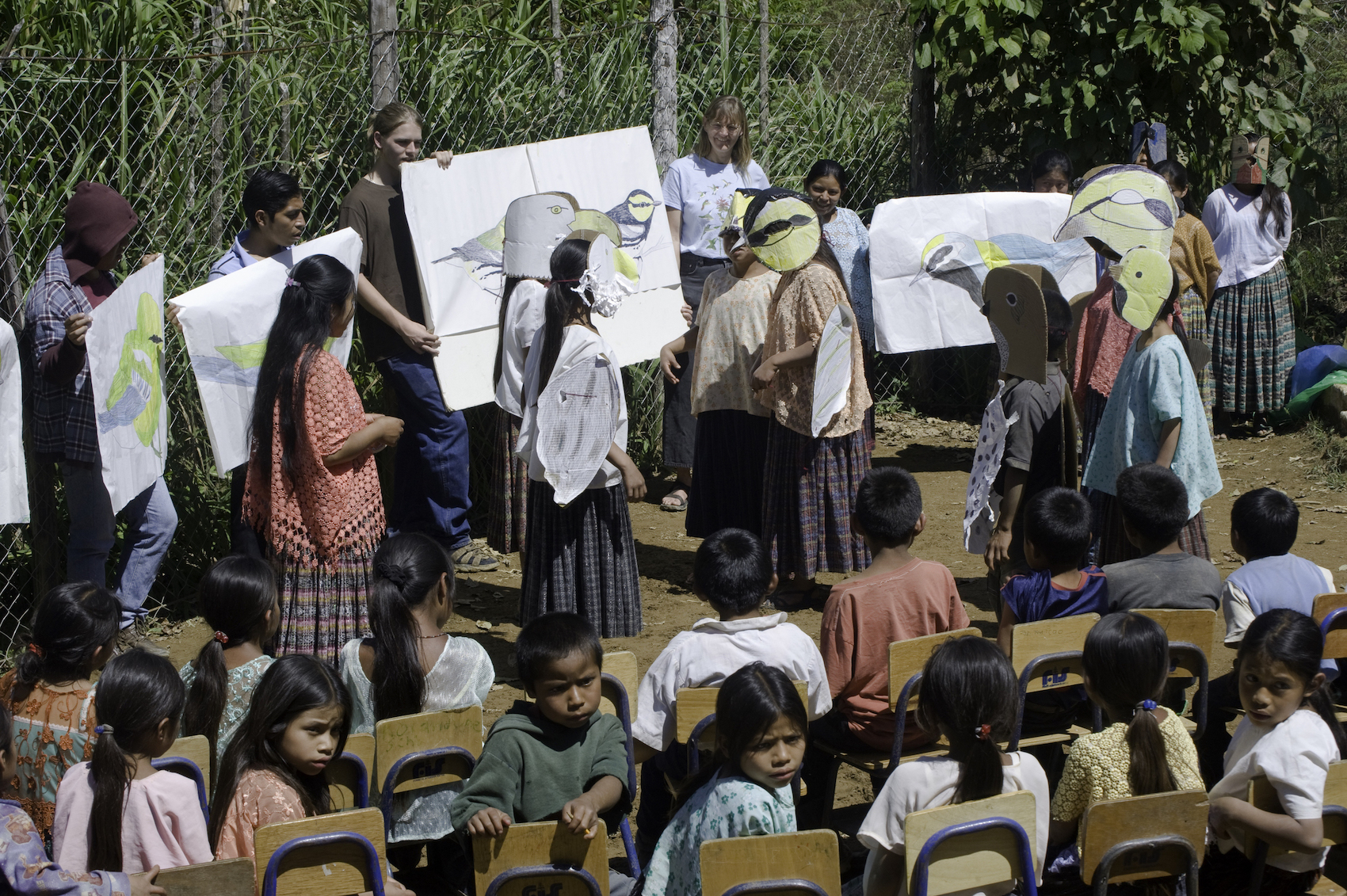 Photo below. From the same day, Marta wearing her Bald Eagle mask and wings and holding a Sibley Guide to Birds (far right) gets a chance to share with her school what she’s learned about birds. The USFW grant provided 12 Sibley guides which turned out to be an awesome resource that CCFC still uses today. Many young Q’eqchi’ Maya primary school kids have learned to migratory birds with the help of those books. Gilda Macz Poou (far left) at the time was a three time WALC alumna, having started WALC in the fall of 2010. 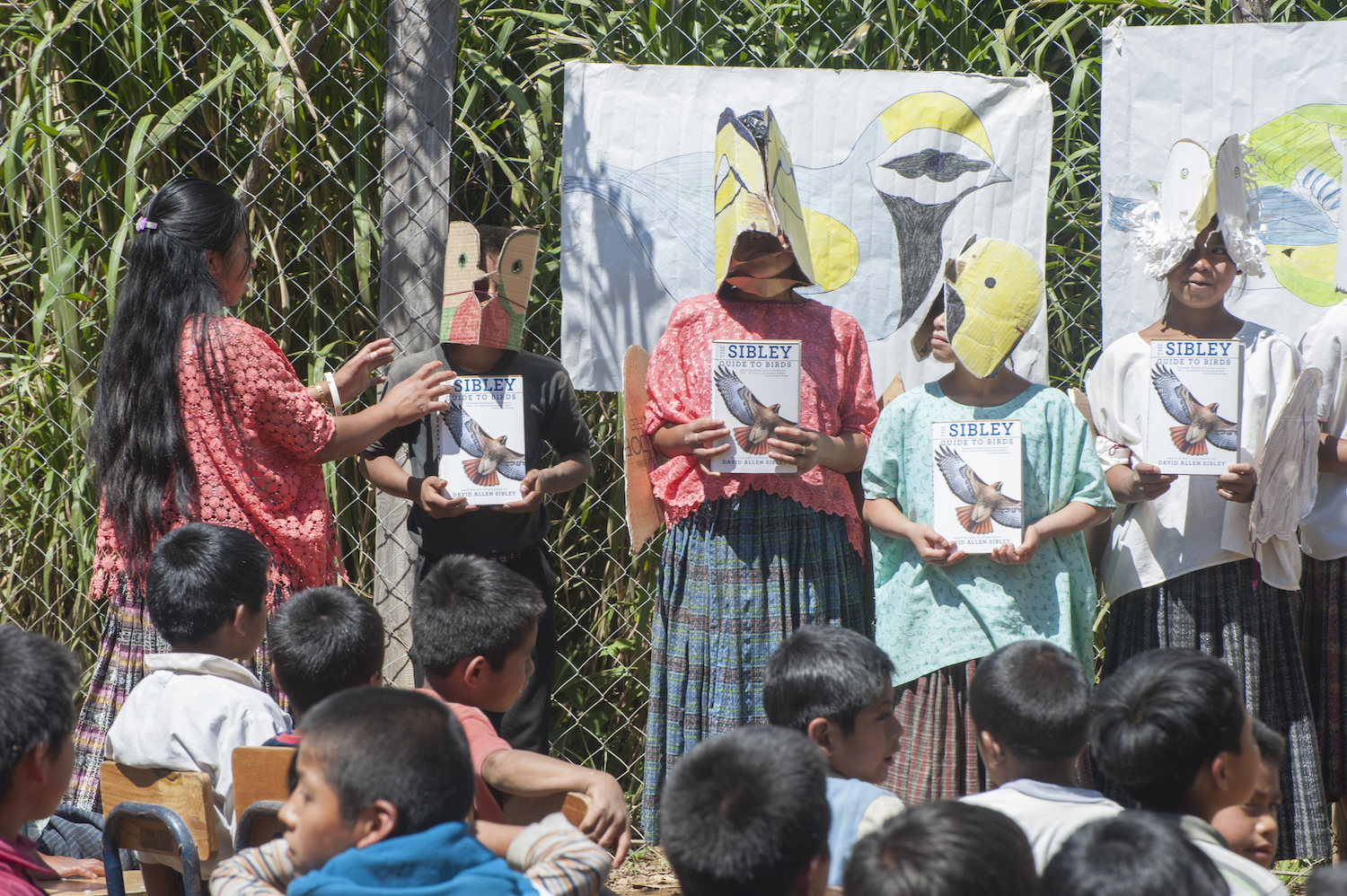 Photo below: In 2015, 5th and 6th graders from Sebob village primary school participated in Kids & Birds at CCFC to learn more about agroecology and the benefits of agro-forest parcels. (Rosalia sixth from the left is in fifth grade) 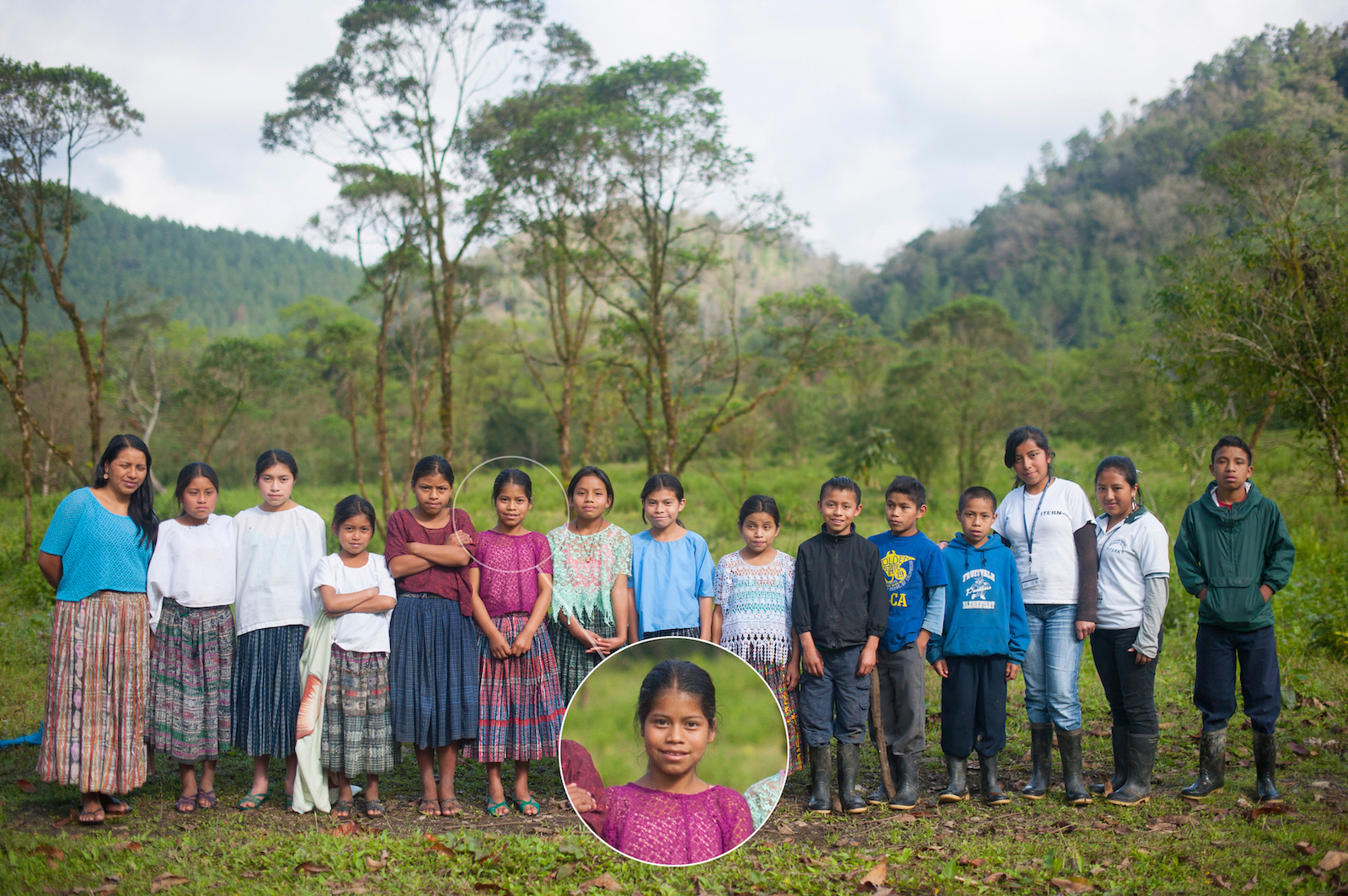 This time they were accompanied by a team of researchers from the Lab of Ornithology at Cornell University. The Cornell research team was under the direction of Dr. Amanda Rodewald and headed up by her graduate student Gemara Gifford. Gemara was doing her master’s research on birds, communities and agro-forest parcels. Her research confirmed that agro-forest parcels benefit people and birds. They conducted point count surveys of bird occupancy and population density, in and around parcels like Marta and Rosalia’s. They also conducted economic impact interviews with 42 families in Sebob and Sanimtaca, documenting the economic benefit of 30 kinds of fruit trees. Gemara concluded that agro-forest parcels can provide suitable habitat for birds. 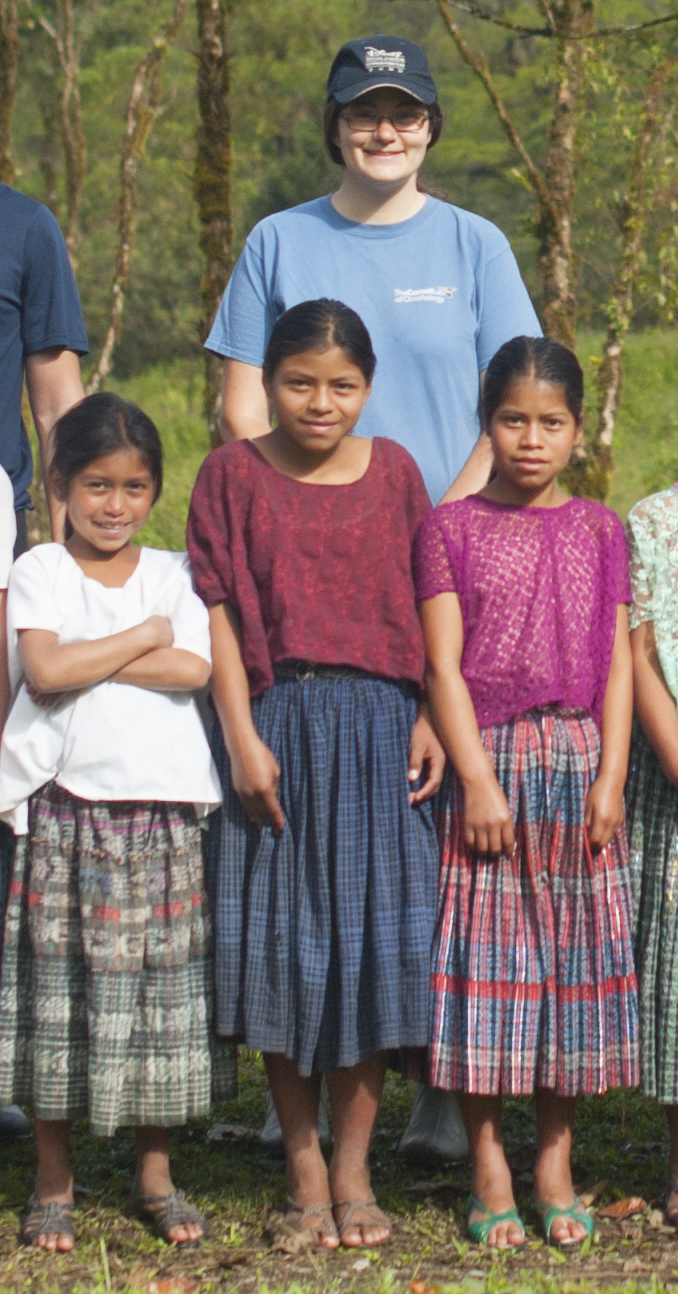 Photo below:  Golden-winged Warbler in an agro-forest parcel in Sebob, 2015.

CCFC is using both WALC and Kids & Birds to promote the establishment of agro-ecosystems across 5 departments in northern Guatemala. These agro-forest parcels improve the livelihoods of smallholder farmers and enhance the habitat for birds and other living things. CCFC is proud to have the support of US Fish and Wildlife and individuals like you to help make this program make a difference for birds and people. 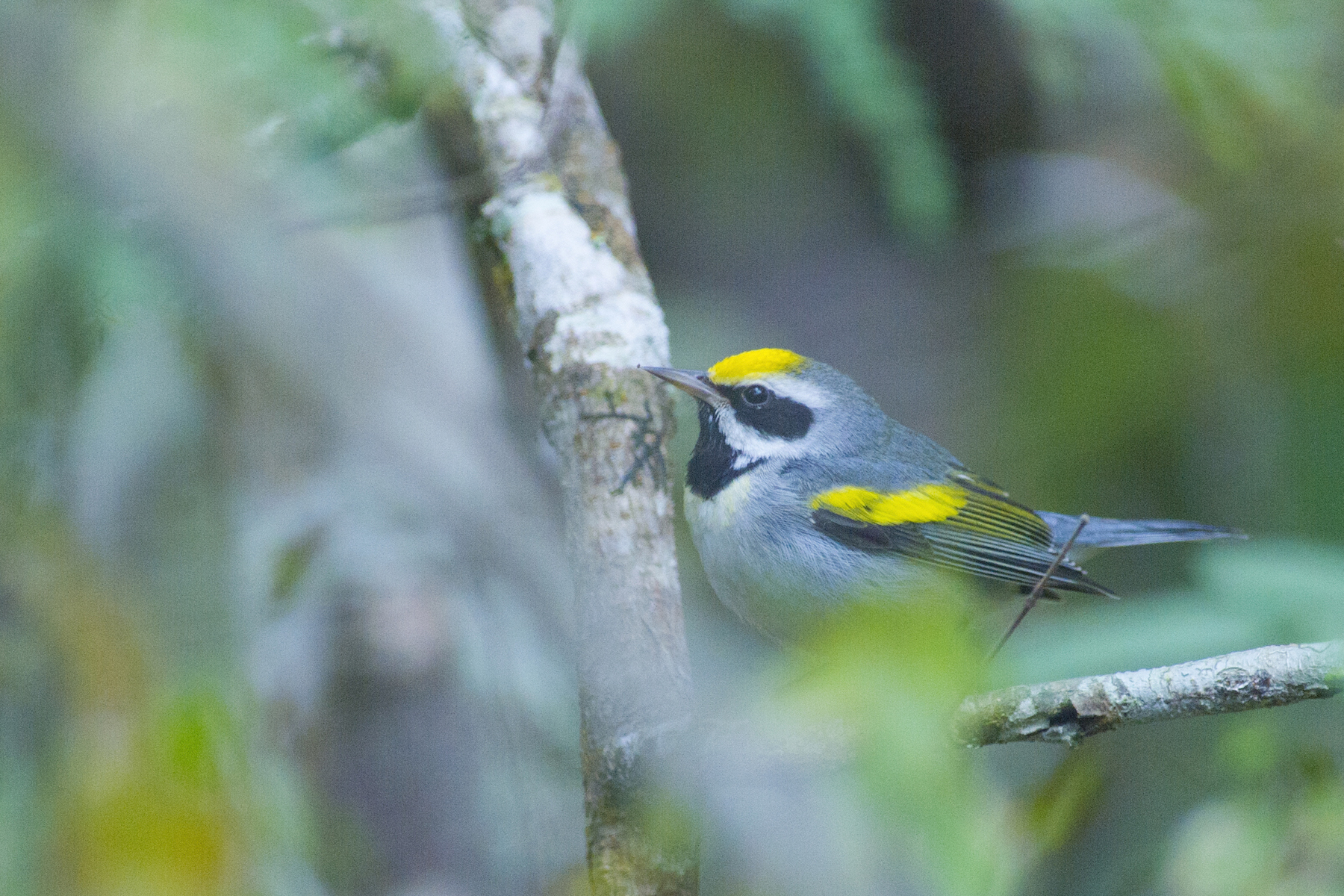 Fruit trees, like this one in the photo below, remove atmospheric CO2, build soil carbon, prevent erosion, and enhance the environment. Growing plums in Sebob requires no chemicals at all, no pesticides or chemical fertilizers. Marta and Rosalia apply a bit of organic compost to their trees every year.

For every year that Marta and her sister Rosalia have been in the WALC program, they have continued to receive the support of WALC scholarships. CCFC hopes to some day fund 100% of these scholarships through adding value to products coming from parcels like Marta and Rosalia’s. 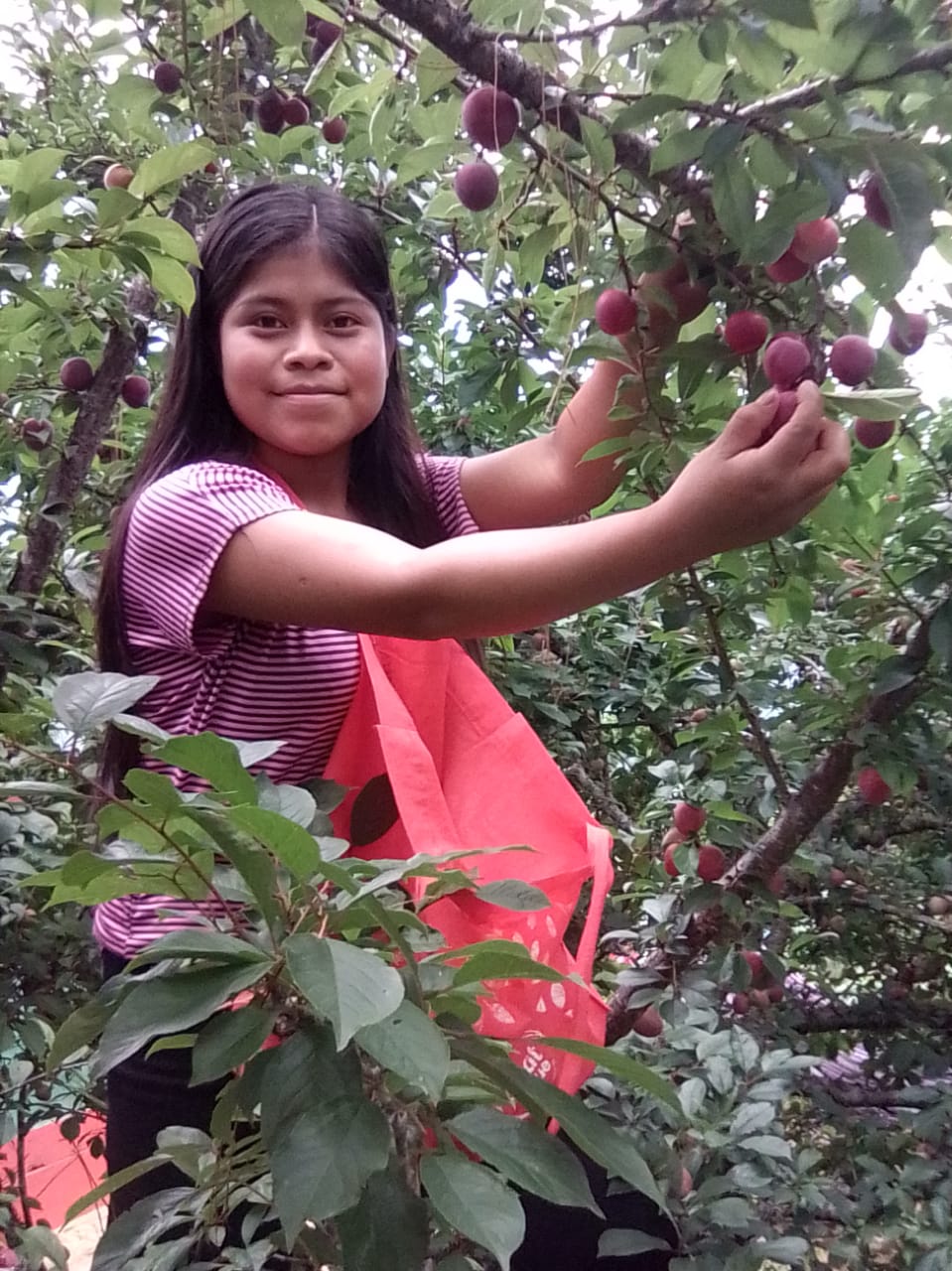 On Wednesday, June 3rd CCFC purchased another 100 lbs of plums from Marta and Rosalia. The plums were personally delivered by their father Jose Si. 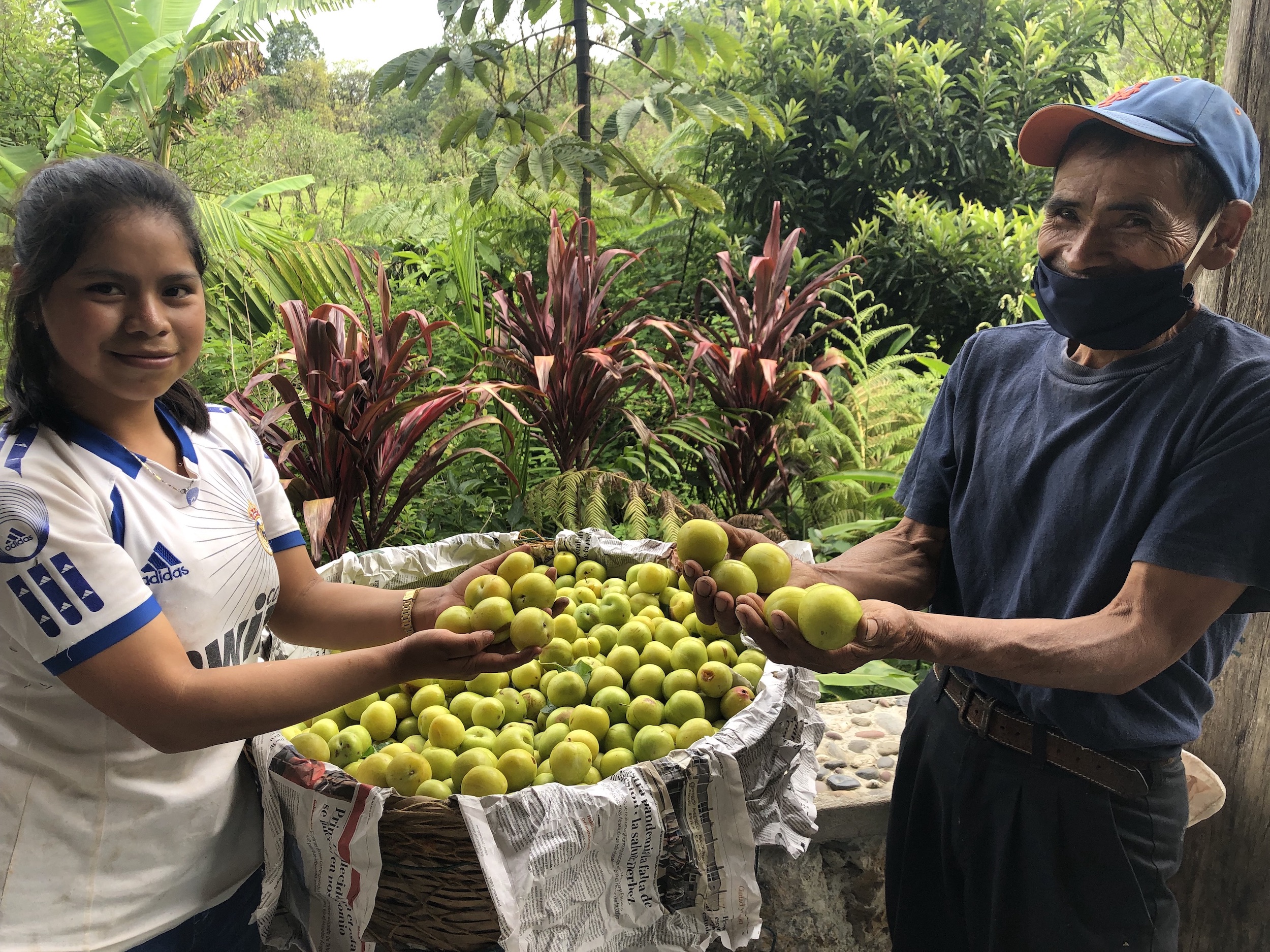 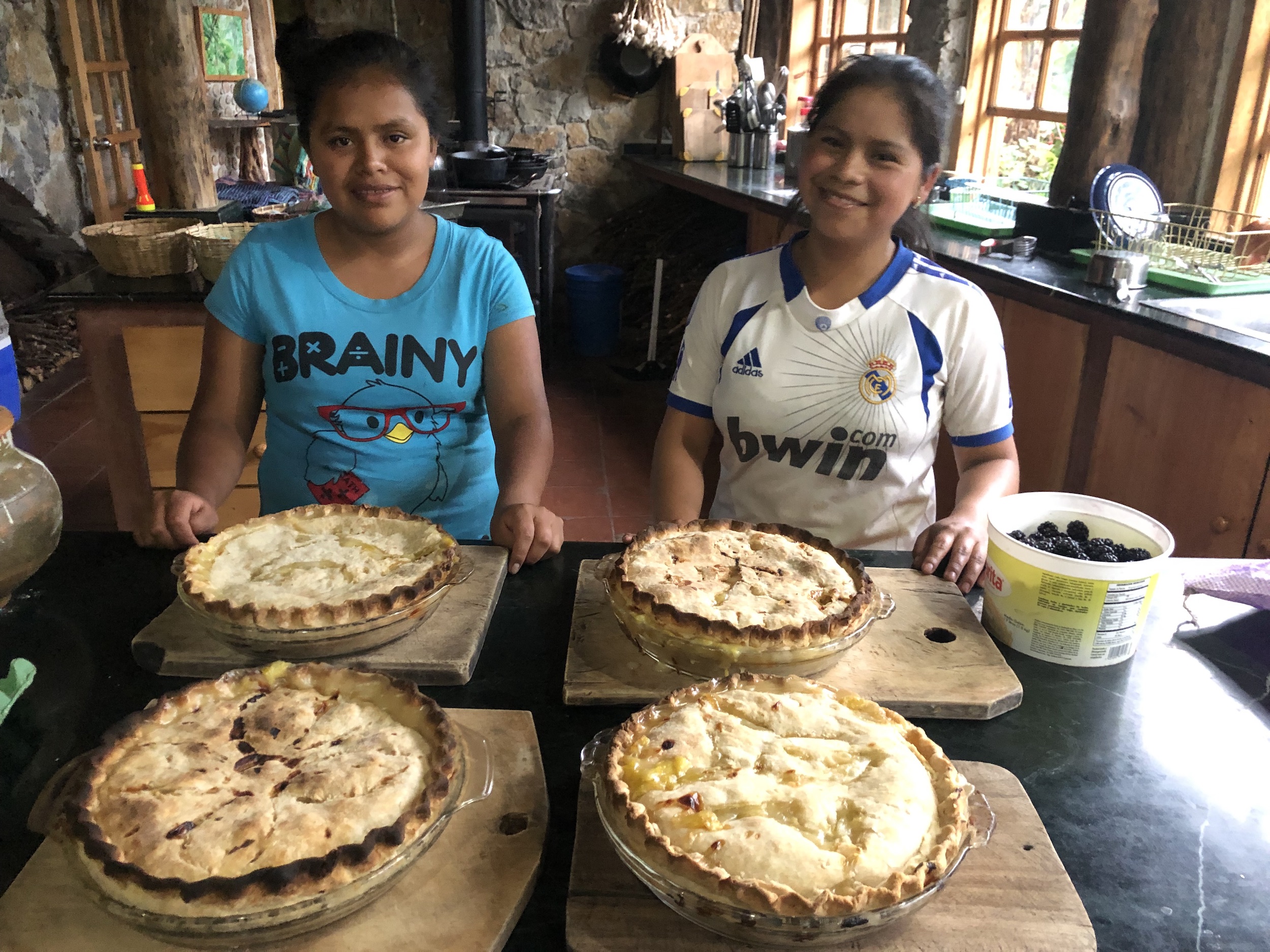 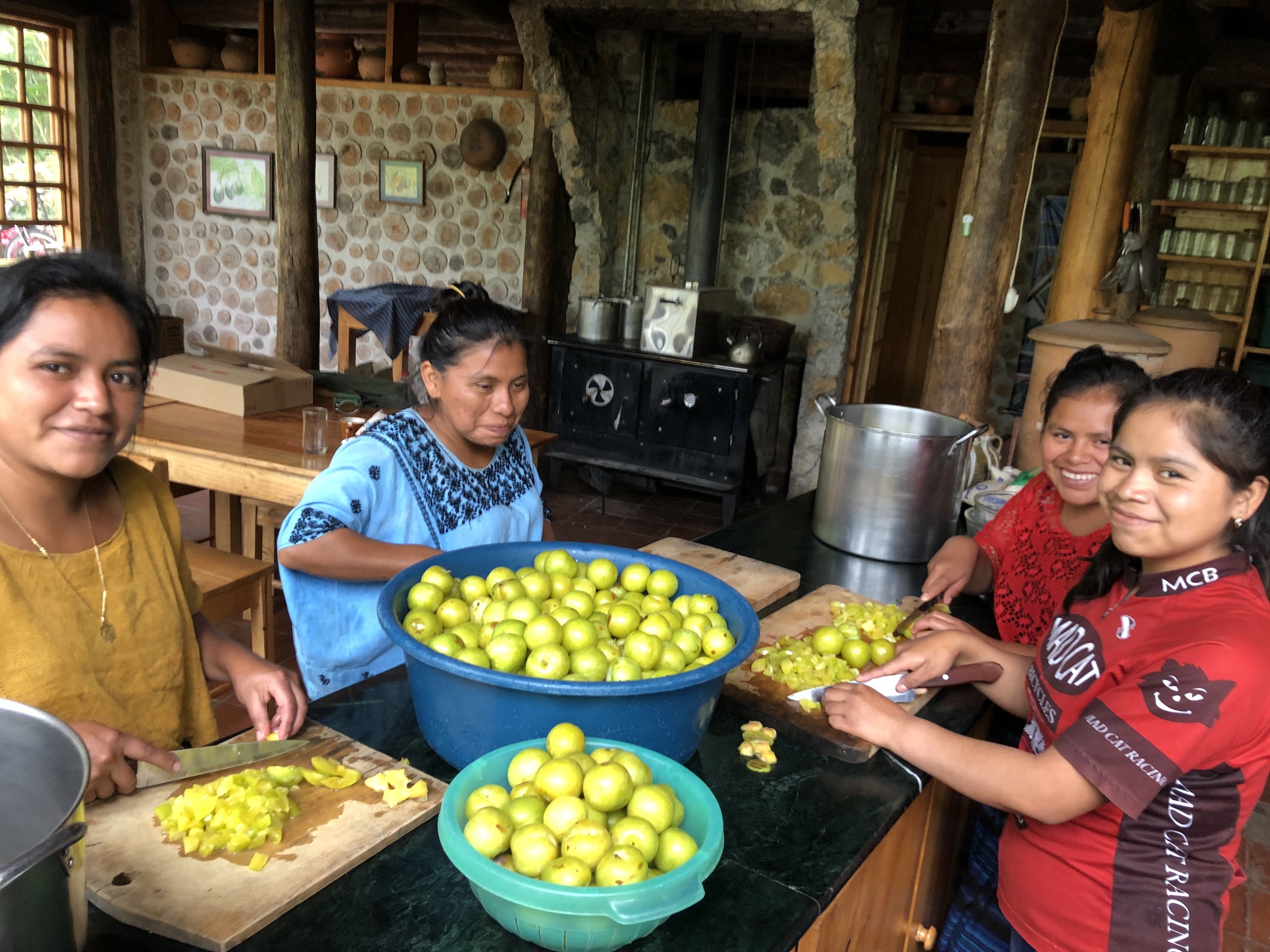