Guatemala, like many developing countries in the tropics, continues to destroy pristine, old growth forests in exchange for opening up more land for cattle and agriculture. With an exploding population, high rates of poverty, lack of access to secondary education, and antiquated agricultural practices, Guatemala is facing all of the conditions for a “perfect storm” of deforestation and land degradation in the coming ten years.

In the country as a whole, Guatemala continues to see rapid and increasing deforestation. The following statistics from the United Nations’ Food and Agriculture Organization: Global Forest Resources Assessment (2005 & 2010) portray a shocking reality.

Deforestation in Guatemala: tracking by decade

Annual rate of change (loss of old growth in hectares)

Deforestation threatens most of the cloud forests of Guatemala. The conservation priority of these areas is sky high. As John Roach writes in his National Geographic article on cloud forests:

“Now, cloud forests are rising to the top of the world’s scientific and conservation agenda. But will scientists learn enough about these important ecosystems to be able to convince the world to conserve them before they are gone forever?”*1

CCFC is working to bring attention to the plight of these endangered forests and forest fragments before it is too late.

Map delineating deforestation in CCFC’s work area from 1986 to 2009 Map made by Ian Pope. Ian researched deforestation and cloud forest loss in the areas above 2,000 meters between the years 1986 and 2009. His results found that the rate of deforestation accelerated by the decade.

Three Big Problems Caused By the Deforestation of Cloud Forests

It’s not just about trees. It’s about so much more than that. Here are three of the most obvious:

Within CCFC’s focus area, there are several species of tree frogs that have only ever been found in the cloud forest of one specific mountain. When these forests are lost, so are the species that live in them, forever. Deforestation in Guatemala threatens the treasure of our global biological heritage.

This is where cloud forests really stand out in the grand scheme of things. Cloud forests are like natural water towers. When deforestation occurs in a cloud forest, the amount of precipitation is decreased, springs dry up and the climate is locally dryer and hotter. Deforestation also affects run off. A cloud forest functions like an enormous sponge. When there is a hard rain, very little water runs off. When the forest is removed and replaced by a cattle pasture or a corn field, the water runs off directly. Studies have been conducted on the absorption value of different kinds of forest types and land cover. Cloud forests have a much higher absorption capacity than other types of forest. That water is what percolates down to recharge springs. When the forest is lost, the absorption capacity is also lost. Hard rains create rapid runoff, flash flooding*3 and landslides*4 That means less water percolating down to recharge the springs. Cloud forests catch the rain and release it slowly.*4 To learn more about cloud forests and water see above.

Deforestation causes 12-18 percent of the world’s carbon emission, almost equal to all the CO2 emissions from the global transport sector. Our forests are home to 80% of all terrestrial biodiversity. However, we are losing our forests at an incredibly high rate. Each year more than 13 million hectares (32 million acres) of forests are lost, an area roughly the size of England.*5

Forests are like enormous vaults of biomass-stored carbon. Slash and burn agriculture turns biomass-stored carbon into atmospheric carbon, exacerbating the problem of global climate change.*6 It is estimated that today Guatemala’s forests cover 32% of the country and contain 281 million metric tons of carbon in living forest biomass. That is 281,000,000 metric tons of carbon locked up in Guatemala’s forests.*7

2 (foot note: Schuster and Cano, 2006. “What Can Scarabaeoidea Contribute to the Knowledge of the Biogeography of Guatemala?”)

3 Houghton R (2012) Carbon emissions and the drivers of deforestation and forest degradation in the tropics. Current Opinion in Environmental Sustainability 4:597–603 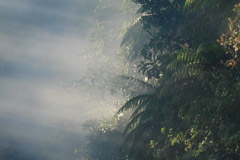